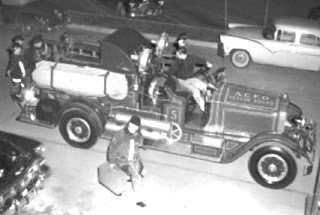 The Arlington County Fire Department, as well as the volunteer companies that preceded it, fielded a variety of vehicles over the years, and old timers are particularly sentimental about one old workhorse.

On May 29, 1931, the American-LaFrance and Foamite Corp. shipped a new ``Rescue Squad Car'' to Arlington County from its factory in Elmira, New York. Throughout the 1930s, 1940s and 1950s, that vehicle – Squad 5 – responded to almost all of the county's major fire and emergencies, as well as incidents in downtown Washington and across Northern Virginia.

The squad was acquired by the Jefferson District Volunteer Fire Department and ran out of Old Station No. 5 at 206 Frazier Avenue in Aurora Hills, a section of Arlington County now commonly known as Crystal City.

``Motive power is furnished by a 114 horsepower engine,'' proclaimed a press release by the manufacturer. ``On it are hollow steel spoke wheels, much stronger than wood, and left hand instead of right hand drive, which gives greater visibility and ease of control in traffic. The entire machine is stream-lined and specially painted in white with gold trimming and blue shadings.''

It resembled a squad car delivered to the Jersey City Fire Department, and featured a ``Big Chief Sterling electric siren'' and a rotary signal.

Squad 5 was built with a 2,000 watt Kohler electric plant mounted behind the driver's seat and operated by its own motor. Two huge floodlights, each with 500-watt bulbs, were mounted on pedestals behind the driver and the officer. A dash mounted ``switchboard'' controlled the generator. The electrical generating set also 200-feet of insulated cable.

``The lights may be raised or lowered and are equipped with swivels,'' the American-LaFrance press release said. ``When necessary, one of them may be quickly removed an attached to the 200 foot cable for portable use.''

These powerful beacons were in great demand at nighttime operations. On Feb. 16, 1942, Squad 5 illuminated the scene at a general alarm fire at the Statler Hilton Hotel construction site at 16th and K Streets, Northwest, one of the most spectacular fires in downtown Washington during World War II. The wind-shipped blaze skipped across an alley and spread to the adjacent Investment Building.

The generator could also power drills, electric saws and other rescue equipment.

There was ample room for staffing and equipment. The squad could seat 10 firefighters on benches running lengthwise behind the driver and officer. Salvage covers, rope, medical supplies and other gear could be stored in compartments beneath the benches. The compartments were also accessible through doors in the rear of the chassis.

Squad 5 played an important role in the development of the county's emergency medical service. The benches could be used to carry the injured to hospital.

For fire fighting, the machine was ``equipped with a fire department Foamite foam generator mounted on the running board, two carbon tetrachloride type Fire-Guns, and two Foamite hand extinguishers,'' the manufacturer said. ``The Foamite generator is for use in fighting fires in highly inflammable liquids where large quantities of Foamite is required. There are 200 feet of chemical hose in addition.''

Squad 5 was also equipped with:

· Two spot lights, one mounted on each rear standard

The squad and its so-called jail breaking equipment saw plenty of action in auto accidents on U.S. Route 1 – Jefferson Davis Highway – a busy north-south highway in the days before the Interstate system. Accident victims were typically transported across the Long Bridge to the old Emergency Hospital in the 1700-block on New York Avenue, Northwest, or the Freedman's Hospital near Howard University. Segregation was common in those days.

When the county's first paid firefighters were hired in 1940, the squad was staffed by both career and volunteer firefighters. Over the years, the rig was modified. It was painted red and lettered in gold. A protective canopy was installed behind the driver and officer to shield the injured on stretchers from the elements. That innovation, ordered by Fire Chief Albert Scheffel, proved unpopular as the canopy often trapped fumes from the squad's exhaust pipes.

The following incident, as reported in the March 5, 1943 edition of the Northern Virginia Sun, illustrated the importance of Squad 5 to the citizenry of Arlington County:

Four persons in Ballston today owe their lives to the prompt efforts of the Jefferson District rescue squad in administering oxygen to them yesterday morning when they were overcome by gas heater fumes at 1122 North Stafford Street.

Mrs. Granville Thomas, 35, her two children, Howard, 15, and Gordon, 15 months, and a neighbor, Mrs. B.B. McNulty, 69, of 1135 North Stafford Street, who had been called to help with the baby, who was ill, were overcome and found by Mr. Thomas after Mrs. McNulty phoned to tell him she had found the three members of the family ill on her arrival.

Mr. Thomas rushed to the house to find Mrs. McNulty also overcome, and he called a cousin, Mrs. Harry Dunn, in Cherrydale, who, in turn, called the rescue squad.

Squad 5 almost met its end at the Murphy & Ames lumberyard fire in Rosslyn on Dec. 28, 1951. Burning embers drifted from the spectacular blaze landed on the rig. ``I remember pulling the seat out because it was on fire,'' said Harold LeRoy, former chief of the Jefferson District Volunteer Fire Department. The radiant heat from that fire also melted the glass panes at the Geophysical Instrument Co.

The squad also attended the following major incidents: The Nov. 1, 1949 crash of Eastern Air Lines into the Potomac River that killed 55 people. ``Black Thursday'' Jan. 15, 1953, when the District of Columbia Fire Department requested mutual aid for almost simultaneous disasters – a runaway passenger train, the Pennsylvania Railroad's Federal Express, that plowed into Union Station, and an explosion that leveled the Standard Tire and Battery Store at 10th and H Streets, Northeast, and injured scores of D.C. firemen.

Retired Battalion Chief James Fought, who was the captain on Squad 5 on Black Thursday, said his crew had just returned from Union Station and was sitting down to lunch when they were sent to the explosion at the battery store.

When Squad 5 was retired after three decades of service, the generator and lights were salvaged and mounted on a trailer that was stored at the property yard.
Posted by ARLINGTON FIRE JOURNAL at Friday, February 11, 2005