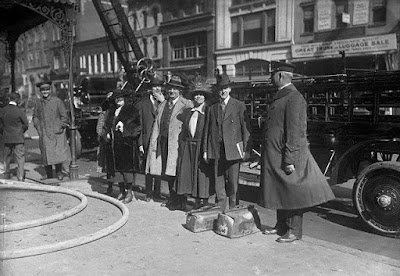 The following tale is based on a speech by former President Gerald Ford on being Vice President of the United States.

In 1922, a general alarm fire broke out in the ballroom atop the Willard Hotel in Washington, and firefighters evacuated guests - including then Vice President Calvin Coolidge.

As the time passed, Coolidge grew tired of waiting in the street and decided to return to his hotel room.

As he headed for the stairs, a fireman demanded identification.

"I am the Vice President," Coolidge said.

The fireman asked: "Vice President of what?"

"Then get back here," the fireman said. "I thought you were Vice President of the hotel."

Coolidge, of course, went on the become president of the United States, earning a little more respect.
Posted by ARLINGTON FIRE JOURNAL at Friday, July 28, 2006 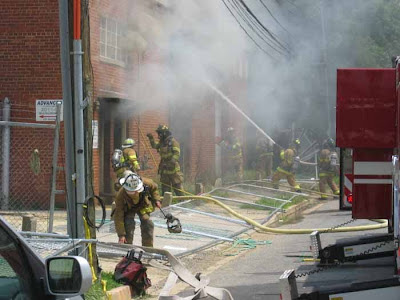 The Arlington County Fire Department contended with fire and flood in late June and early July 2006.

Firefighters employed master streams to extinguish a three-alarm warehouse fire in the 2000-block of North Westmoreland Street - just across from Station No. 6 in Falls Church - on July 15.

``Engine 106 arrived to find heavy fire blowing out of the Adam and Baker sides of a vacant one-story 75' X 150' former moving and storage warehouse,'' according to Capt. Randy Higgins on acfd3.com. ``The second and third alarms were quickly sounded bringing virtually the entire on duty crews from Arlington and over 11 units from Fairfax County.''

Just over a week earlier, on June 30, firefighters tackled a two-alarm fire in a high-rise at 4250 North Fairfax Drive in Ballston - an alarm that initially came in as a medical emergency.

Instead of a patient, a building engineer greeted Engine 102 and Medic 102 and ``advised them of sparks coming from an electric panel in the main electric vault on the P-1 level,'' according to Higgins. ``Engine 102 called for the box to be filled ... and then proceeded to the fire control room where multiple devices on multiple floors were lighting up the panel! ''

Office workers on the 13th floor reported water pouring from the ceiling, and firefighters sent to the floor above - No. 14 - discovered heavy smoke and fire, which was promptly entinguished, according to Higgins.

Firefighters also answered hundreds of calls during the worst rain in more than 100 years of record keeping in late June.

The Arlington County Emergency Communications Center dispatched more than 580 service calls to police and fire units between 9 p.m. on June 25 and and 11 a.m. the next day, according to the county government web site.

Career and volunteer firefighters activated additional units to respond to all the alarms.
Posted by ARLINGTON FIRE JOURNAL at Thursday, July 27, 2006