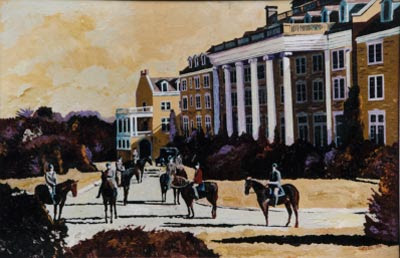 On Nov. 28, 1982, tourists visiting Arlington National Cemetery discovered the charred body of a man at the grave of President John F. Kennedy - lying three feet from the eternal flame, The New York Times said. Police determined the man was intoxicated and had been trying to light a cigarette with a rolled newspaper. 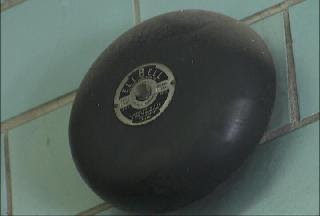 Old bell at Station No. 4

Heart attacks from stress are a leading cause of firefighter deaths, so the Arlington County Fire Department has found a safer way to ease firefighters into emergencies - a soothing computer-generated voice over firehouse public address speakers.

Rather than the blast of an airhorn, a piercing radio tone or a bell jolting them into action, firefighters are alerted by a calm female voice - "Engine Company, structure fire" for example - followed by full details announced by a live 911 dispatcher.

Battalion Chief Ben Barksdale said the system has improved response times because firefighters aren't startled, according to Channel 5 News.
Regarding the ``soothing alarm,'' a Fire Journal reader - who grew up in Ohio many years ago - writes:


``Even as a kid, my heart always took a jump when Columbus rang four quick blows on a bell - sharp and loud - over the radio as a prefix to a structural response.They changed it some years later to a tone, that was only slightly less terrifying.''

Monday, March 10, 2008
By Daniela Deane
Washington Post Staff Writer
Jesus Escobedo is nodding off atop his Batman sheets when the little red lights flip on, casting a low light across his face. A woman's voice informs him gently, almost seductively, that it's time to get up. An alert is going out because an elderly nursing home patient is on the edge of death.

"Engine, medic, altered level of consciousness," the voice tells the Arlington County firefighter as he jumps out of his bed at the Ballston firehouse. In a matter of minutes, Escobedo is dressed and hurtling down Carlin Springs Road toward the nursing home.

"One minute you're sleeping, and the next minute you're going 50 miles an hour," said Escobedo, 27, sitting in the firetruck, sirens blaring, on his way to the 911 call last week. "And it can happen several times a night. It's a lot better when the waking up part is a little bit nicer."

A firefighter's job can be very stressful, involving long shifts, emotionally draining work and a response time measured in seconds, often many times a night. To reduce the cumulative stress on their 315 firefighters and paramedics, Arlington was one of the first jurisdictions in the Washington region to install kinder, gentler wake-up calls in its 10 firehouses.

"Before we put this in, fluorescent lights would snap on overhead, lighting up the whole place, and there would be this loud, shrill, rapid-fire beeping," said Capt. Randy Higgins, an Arlington firefighter for 24 years and Escobedo's shift supervisor. "You'd go from sound asleep to your heart beating wildly in your throat several times a night."

The consequences can be alarming.

Cardiac arrest -- not fighting fires -- is the leading cause of death among the estimated 300,000 full-time firefighters throughout the country, said Patrick Morrison of the International Association of Fire Fighters. Morrison, assistant in charge of education and training at the union, said that more than 50 firefighters die each year of heart attacks.

"The big thing we're seeing is that loud, sudden sounds give them a huge adrenaline dump," he said. "And the cumulative effect of that is contributing to early heart disease."

Morrison said studies have shown that heart rates more than double when firefighters, even the youngest, most fit ones, are roused by loud sounds and lights. Arlington is at the forefront of a national trend toward less jarring wake-up calls at firehouses, he said.

"When you go through that surge of adrenaline as many times as we do, it's worth making these kinds of investments in a system that diminishes that effect just a little bit," Arlington Fire Chief James Schwartz said.

Arlington installed its system in 2004, just six months after the city of Manassas Park. Since then, Prince William and Stafford counties have opted for the system, which is sold by several vendors.

Other local fire departments, including Fairfax, want to make the switch as they upgrade their facilities or their budgets allow it.

With the economic downturn, it is unclear when funds will be approved for the county to install the system in its 38 fire stations, Fairfax Battalion Chief Dean Cox said. "It's becoming the standard in the Metro area," he said.

Besides a healthier wake-up, the system has other advantages.

It's targeted, so it alerts only the crew needed on a specific call, not everyone in the firehouse. And the computer-activated system is faster, so it shaves important seconds off response time. The firefighters are usually already running toward their vehicles by the time they hear where they're going.

"It might save them 10 to 15 seconds," said Carol Saulnier, Arlington's chief fire marshal. "That might not seem like a lot, but it can really make the difference between life and death."

Arlington's average response time -- from the moment the dispatcher advises the firefighters to the time they get to their destination -- is four minutes, which is better than the national standard. Arlington firefighters and paramedics answered 24,215 emergency calls in 2007; Escobedo's station in Ballston took 5,565 of those calls.

Schwartz gets excited about another feature of the system: the ability of one jurisdiction to directly dispatch firefighters from another. That won't work until everyone is on the same page, though.

"Several times a day already, units from Fairfax run into Arlington to serve our citizens who dial 911 on the west end of Columbia Pike, since the closest unit to a good deal of that portion of Arlington is in Baileys Crossroads," said Schwartz. "When Fairfax comes online with the system, we will be able to alert them from our own dispatch center, which could cut up to a couple minutes off our response time."

Schwartz said that "response time is everything" in the emergency services business. "If you're in cardiac arrest, you need CPR within four minutes," he said.

A few decades ago, volunteer firefighters in many rural communities across the country would be roused from beds in their own homes by loud wailing sirens that would wake up the whole area.

Then came the night-watch method of alert, where firefighters would take turns staying up to answer a dispatcher's call on the phone and then wake up the rest of the team. Or one firefighter would sleep next to the phone and have the responsibility of answering it and waking everyone up. After that, the radio-based system with the loud, shrill beep-beep prevailed.

Still, in some fire departments in the country, every time there's a call, every fire station in the area gets notified, according to the IAFF.

Escobedo, who's only worked with the new system, admits he's got the sultry woman's voice turned up as high as it goes. He said he tends to be a heavy sleeper.

Is there any worry that it's all just a little too gentle?

"Nah," said Higgins. "There's a lot of peer pressure to get up quickly in this job. You don't want to be the guy who slept through the alarm. You get called Rip Van Winkle and stuff like that. You never live it down."
Posted by ARLINGTON FIRE JOURNAL at Thursday, February 07, 2008 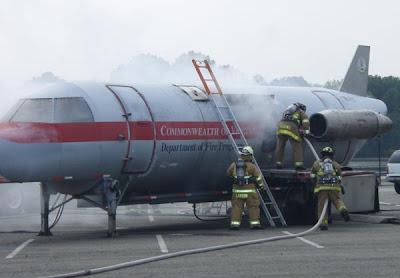