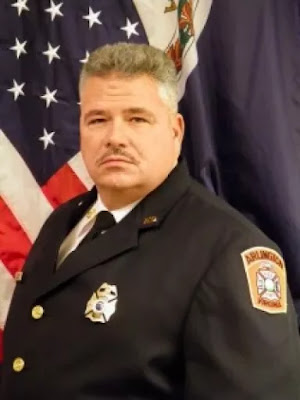 Bonzano began his career in 1984 as a firefighter/paramedic and has worked in a variety of positions, most recently Acting Assistant Chief.

“Chief Bonzano brings a wealth of experience to this position, as well as deep ties to the Arlington community and Fire Department,” Schwartz said. “Over the last three decades, he has been committed to being a strong and progressive leader and I am thrilled that he will continue to do so as our new Fire Chief.”

He replaces James Schwartz, who was appointed deputy county manager.
Posted by ARLINGTON FIRE JOURNAL at Tuesday, May 10, 2016 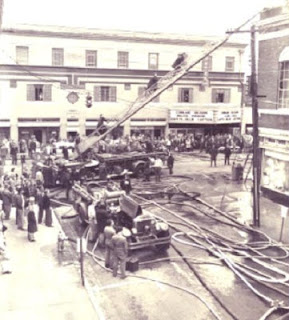 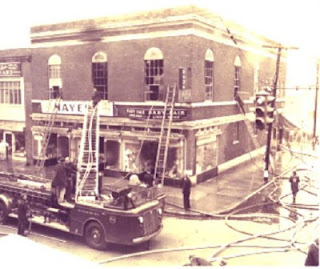 On April 14, 1949, flames raged in the two-story Odd Fellows Hall at Wilson Boulevard and Hudson Street, the heart of Clarendon’s business district. Firefighters saved the building, which still stands today.

A merchant quoted by The Post estimated damage at $50,000.

The first alarm was sounded at 9:45 a.m. Second- and third-alarms followed. Offices on the second floor of the brick and masonry structure were gutted. On the ground floor, the Baby Fair Linen Shop and Mayer gift shop sustained smoke and water damage.

Firefighters advanced a hose line into the entrance to a beauty shop on the Hudson Street side of the building and also raised Truck 1’s aerial ladder on Wilson Boulevard to advance lines to the second floor. Ground ladders were also raised.

A police line was established across from the blaze, where spectators lined the sidewalk in front of the old Ashton Theatre, which was showing the movie ``Command Decision,’’ starring Walter Pidgeon and Clark Gable.
Posted by ARLINGTON FIRE JOURNAL at Tuesday, May 10, 2016 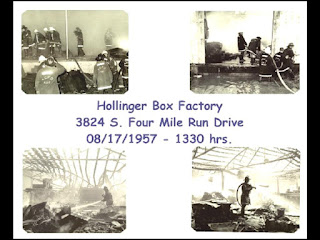 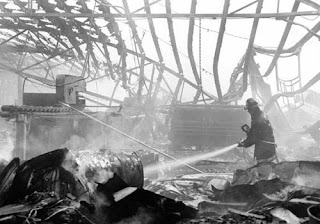 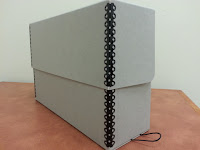 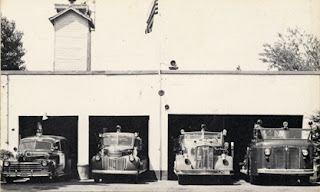 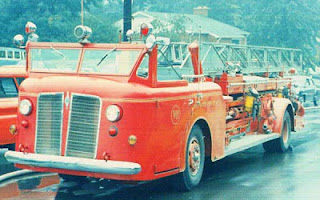 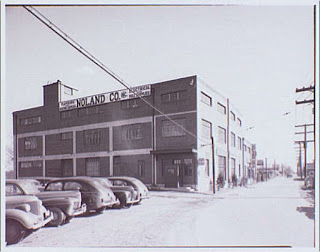 The Arlington County Fire Department waged battle on a stubborn blaze at the Noland Co. plumbing and heating supply warehouse in Rosslyn on June 26, 1952.

As if the smoke and flames were’t hot enough, a heat wave had punished the Washington area that summer. When the fire alarm was struck at about 2:30 p.m., the mercury topped 100 degrees outside 1823 North Arlington Ridge Road.
Crews encountered great difficulty reaching the seat of the fire among stacked cardboard and wooden boxes on the third floor of the brick building.``We could only get to the top of the stairs – it was too damn hot,’’ recalled George Kirschbaum, then a 22-year-old volunteer riding at Company 1.
The tar on the roof was bubbling, said retired firefighter Frank Higgins, also a volunteer at the time. Higgins was riding the truck from Clarendon. Ladder pipes were pressed into service.
A District of Columbia fire boat stood by on the Potomac River in case the fire threatened the American and Cities Service Oil Co. across the street. It never did.
The district also sent a ladder company.
By the time it was over four hours later, more than 20 firefighters suffered injuries, ranging from smoke inhalation and heat exhaustion to cuts and bruises.
The District of Columbia, Alexandria and Fairfax County sent ambulances and rescue squads to treat the casualties. The men were ``dropping like flies,’’ a firefighter told The Washington Post.
A detachment of Marines was sent to the scene ``when the heat threatened to wipe out the fire-fighting force,’’ The Washington Star said.
Arlington County’s drillmaster and acting fire chief, Joseph Clements, was overcome and carried from the warehouse. The D.C. fire department’s physician, Dr. William Claudy, suffered smoke inhalation. Also among the injured was firefighter Charles Theodore, who would die a decade later in the line of duty.
Volunteer George Vahoney, 19, of Company 3, was the only firefighter to be admitted to Arlington Hospital, newspapers said. Vahoney fell unconscious after making two trips into the burning warehouse and was pulled out by Kirschbaum.
``They told me that my heart stopped beating a couple of times,’’ Vahoney told a Daily Sun reporter Woody Hubbell from his bed at Arlington Hospital. ``I sure am glad to be here.’’
Kirschbaum, himself, also suffered the effects of the heat and smoke and was administered oxygen and taken to Arlington Hospital in Squad 5. After his tour of duty in the fire service, Vahoney went on to become a surgeon, Kirschbaum said.

Another noteworthy industrial fire broke out in Rosslyn on May 3, 1948.

Flames destroyed Worthington Oil Refiners Inc. The Arlington County Firemen’s Association cited Firefighter William ``Honey’’ Biggs of the Ballston VFD for his heroism at the fire, according to The Sun newspaper. Protected by a water curtain, Biggs shut off a valve on an oil line feeding the fire. |

The refinery processed used petroleum products. Engine 4 from Clarendon and Engine 3 from Cherrydale were dispatched on the first alarm. Engine 2 from Ballston ran the second alarm. (These were the days before Station No. 10 was opened on Wilson Boulevard in Rosslyn.)In another instance, crews coped with bitter cold and a frozen hydrant when fire gutted the Standard Linen Service Co. at 1425 Lee Highway on Dec. 19, 1942. Frostbite was a problem. Three firefighters were injured, according to The Sun. The industrial laundry used chemicals to clean linen, uniforms and work clothes, such as coveralls.In 1944 or 1945, a fuel truck and a milk truck collided at Rosslyn Circle, setting some buildings ablaze. And, according to some accounts, a meat packing plant near the site of the current Key Bridge Marriott hotel caught fire sometime in the 1910s or 1920s.
Posted by ARLINGTON FIRE JOURNAL at Tuesday, May 10, 2016