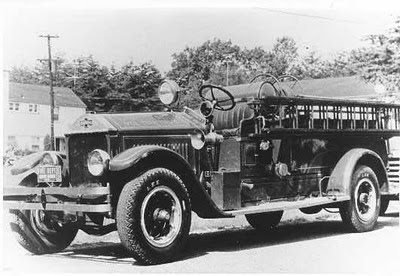 Volunteer firemen from Arlington County rolled into Washington, D.C. on the night of Jan. 16-17, 1928, after an arsonist named John J. Fisher set a series of blazes that tested the entire city fire department as well as crews from as far away as Baltimore - an episode remembered for years as "Fisher's Night."

Deputy Chief Philip Nicholson of the District of Columbia Fire Department called it the wildest night of his career. Suspecting one or more "fire bugs" were on the loose, the Metropolitan police assigned officers to guard lumber yards and other inviting industrial targets.

Not since British troops set fire to the city in August 1814 had such a conflagration visited Washington. ``As fast as companies could be spared, they were dispatched from one fire to the other,'' Nicholson said.

So many firefighters collapsed from the smoke and exhaustion, that they overwhelmed Emergency Hospital. Doctors ran out of a medicinal whiskey, a common anecdote at that time, the supply of which was restricted by prohibition laws. With the blessing of the police, the doctors put out a call to bootleggers for more.

Fisher, 34, a former psychiatric patient, policeman and veteran of World War I, said an ``irresistible impulse'' led him to set the fires.

"Five extra alarm fires, interested with several minor ones and a few false ones, threw the national capital into a state of turmoil," The Associated Press reported.

The largest of the fires swept a Woolworth's ``Five and Dime'' store at 9th Street and Pennsylvania Avenue, Northwest, within sight of the Capitol. Firefighters had the upper hand on the Woolworth's blaze until the flames set a gas line alight.

Businesses along the city's ``Produce Row,'' located near the old Central Market, also went up in flames, as did businesses in the city's northeast quadrant. The smallers fires and false alarms "kept firemen on a constant procession during the night," the Associated Press reported in a story printed in the St. Joseph News-Press of Misouri.

In 1928, the District of Columbia Fire Department fielded more than 50 companies - engine, hook and ladder and rescue - that operated from about 30 firehouses. All its men were paid. The firehouses were divided between six battalions (Battalions 1-5 and the ``Central Battalion'' downtown.) The Virginia and Maryland suburbs, in the meantime, were protected by independent volunteer fire departments.

The headline of The Washington Post reported that firefighters were pushed to the limit:

An Associated Press wire dispatch in The New York Times on Jan. 18 reported:

``Twenty-four fire alarms worked Washington up to fever heat between midnight and noon and scurried the entire city's fire fighting forces and those of other cities to a dozen blazes in different sections of the capital.

``Taking stock of the unprecedented situation, officials found that more than thirty firemen had been slightly injured and property damaged to the extent of several hundred thousand dollars.''

A history of the D.C. Fire Department (posted on the city's website) said: ``It had become obvious that a maniacal arsonist was on the loose.''

Baltimore, 40 miles to the north, sent help and its ``fire forces helped fight two of the big blazes, manned fire houses for protective purposes, and, incidentally paid a twenty-four-year-old debt to the capital which helped Baltimore combat its big fire of 1904,'' the AP reported.

``Ten companies, an ambulance and several deputies made the long run from Baltimore and furnished an unusual spectacle of blazing engines and screeching sirens,'' the AP said.

(In the Great Baltimore Fire of Feb. 7, 1904, flames burned for 30 hours over 140 acres, destroying 1,500 buildings and at least 2,500 businesses. That conflagration was many times more serious than ``Fisher's Night,'' causing $100 million in damage in 1904 dollars, according to the Baltimore City Fire Department website. Additionally, the Baltimore fire was an accident - started by an explosion at the John E. Hurst Co.)

The alarms bells in Washington's firehouses tapped out round after round on Fisher's Night.

To report a fire, citizens public pulled levers on street corner Gamewell boxes - typically painted red, topped by a light and assigned a unique box number. Inside the boxes were a spring wound movement, and when the box was pulled, four rounds of the box number rang into the alarm office.

``Running cards'' listed the units ``due'' at each box alarm.

Fire officers used telegraph keys in the boxes to request more men and equipment (second alarm, third alarm, etc.) and also carried telephone sets that could be connected to the boxes to speak to the alarm office.

Among the major fires on Fisher's Night:

Police arrested Fisher after he threatened a man who attempted to pull Box 89, at the corner of 13th and W Streets, Northwest - two miles north of the first fire.

"Firemen fell so rapidly under the stiffling smoke at the Woolworth and produce stores, where scores of live chickens burned, that ambulances were not able to carry them all to the hospital. An emergency first aid station was established close to the fires and many firemen were treated there, going back to the hose lines after recovering.

"At Emergency Hospital an nunusal situation was reported to have developed when doctors found the institution's stock of whiskey inadequate. Word went forth that bootleggers be sent in and police officers were said to have agreed not to molest any venturing inside the building. There was no record whether purchases were made from the bootleggers, however."

``Confessing to touching off two of the disasterous fires which spread horror through the city Monday night and yesterday morning, John J. Fisher, of 716 Roxboro Place Northwest, told police of the Thirteenth Precinct last night that he was moved by an ``irresistible impulse.''

That night, Fisher was moved from the D.C. Jail to the ``psychopathic ward'' at the old Gallinger Hospital.

Alieniests at Gallinger are to Observe
Fisher Ten Days Before Reporting

In February 1928, a grand jury indicted Fisher on two counts of arson and a court committed him to St. Elizabeths, the city's mental hospital, that May, according to The Washington Post. In 1931, Fisher requested to be released from St. Elizabeths.

His request was denied by the court.

St. Elizabeths was established in 1855 as the Government Hospital for the Insane by reformer Dorothea Dix to provide the ``most humane care and enlightened curative treatment of the insane of the Army, Navy, and District of Columbia,'' according to the U.S. National Library of Medicinel. Congress officially changed the hospital's name to St. Elizabeths in 1916. In colonial times, the site had been called St. Elizabeths by locals.

Writing in his 1936 history of the D.C. Fire Department, Chief Nicholson shared his recollections of Fisher's Night:

Fisher, it turned out, had a long history of fire setting.

On Jan. 22, 1928, The Washington Post published an interview with Fisher:

Burned Homes and Haystacks
Behind Battle-lines

Happiest When Shells Made France Inferno

Fought Duels With Pal for Thrills

In the psychopathic ward at Gallinger Hospital yesterday afternoon a mild mannered, clean cut appearing young man sat on the edge of a cot and related the story of a strange obsession which seized him when he was a 9-year-old schoolboy, clung to him for 20 years and caused him to set fire to more than 100 homes, warehouses, lumber yards and business establishments.