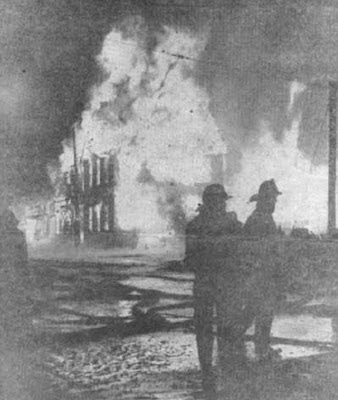 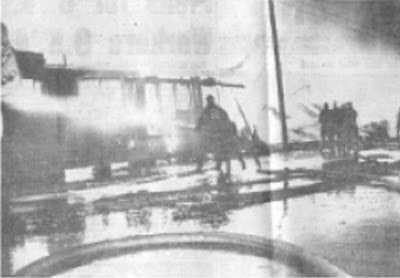 Photos: www.acfd3.com
A spectacular fire broke out at the old Murphy & Ames lumber yard in Rosslyn on the night of Friday, Dec. 28, 1951.

The first alarm was transmitted at 9:15 p.m. and at the height of the blaze, the flames were visible for miles.

"I was out in Merrifield and I could see the smoke and the glow - so I followed it," said retired station commander George Kirschbaum, at the time a volunteer. "It looked like all of Arlington was on fire." Veteran volunteer Harold LeRoy also saw the glow from Alexandria.

With all of Arlington's fire crews pressed into service, the inferno brought the first test of a mutual aid agreement approved by Congress and the state legislatures of Virginia and Maryland, said John Paul Jones, a former president of the Arlington Volunteer Fireman's Association, quoted by The Washington Post.

Firefighters from Alexandria, the District of Columbia and Montgomery County answered the alarm. In all, 42 pieces of apparatus responded to the general alarm, and "at least 200 firemen, including volunteers" battled the blaze in bitter winter cold, said Deputy Fire Chief Percy Finisecy, who was quoted in the Dec. 30 edition of the Post.

Besides the devastation at the lumber yard, firefighters contended with embers that threatened wood frame homes in the neighborhood. Some crews were assigned exclusively to brand patrol.

Even old Rescue Squad 5 was scorched. "I remember pulling the seat out because it was on fire," LeRoy recalled. The heat melted hundreds of glass panes at the Geophysical Instrument Co. and firefighters played fire streams on that building to prevent the fire from spreading.

William Clark, a volunteer at Company 1, was the senior operator on duty at the PEPCO substation across the Potomac River in Georgetown. While he couldn't leave his post, he had a good view of the blaze -- and threw the switch to cut power to the area. "I wanted to go but I couldn't," Clark said.

The fire was declared under control at midnight.

Salvage and overhaul operations continued into Saturday as each stack of wood was broken down and wetted. Damage was estimated at $300,000.
Posted by ARLINGTON FIRE JOURNAL at Thursday, January 20, 2011 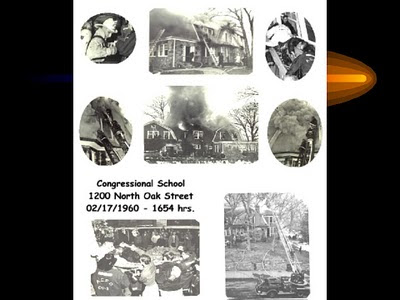 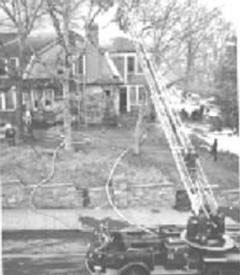 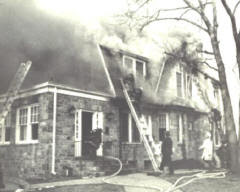 The two-story, fieldstone structure - at North 12th and Nash Streets - was originally built as the residence of General George Patton, the World War II hero.

The fire was discovered at about 5 p.m. after most of the students and faculty had left for the day. Principal Lillie Long smelled smoke. Fred Nibblins, a custodian, opened a closet door and was driven back ``by dense black smoke and jets of flame which seemed to be licking down from the attic,'' The Washington Post said.

Switchboard operator Natalie Manning telephoned the fire department as custodian Nibblins tried to fight the blaze with fire extinguishers. A passing motorist, Army Sergeant John Comeaux, stopped to help Nibblins fight the fire. It was to no avail.

Amid the chaos, Lieutenant Fred Bryan of Company 2 almost lost his life in the fire. Bryan fell unconscious inside the school after his breathing apparatus became disabled. ``Trapped for 10 minutes, Lt. Bryan was pulled out of the attic by fellow firemen and carried down the extension ladder,'' The Washington Star said.

Bryan was revived and taken to Arlington Hospital where he recovered from his injuries.

Three other members of the fire department - Captain Arthur Willett, Inspector Robert Buckrop and Firefighter David Dant - were treated at the scene for minor injuries, the Post said.

A volunteer from Company 2, Bob Gill, was also trapped for a time but got out safely with the help of other firefighters.

Fire Marshal Leslie Shelton told the Star the fire started in the attic ``and burned for quite a while unnoticed.'' Malcolm Devers, president of the Congressional Schools of Virginia, said defective wiring probably caused the blaze.

According to school folklore, snacking squirrels damaged the wires. 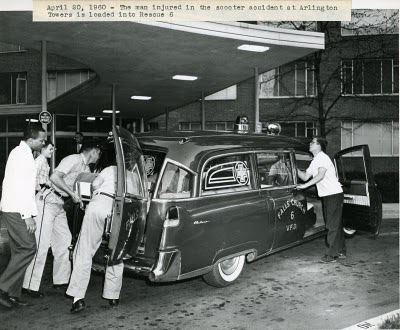