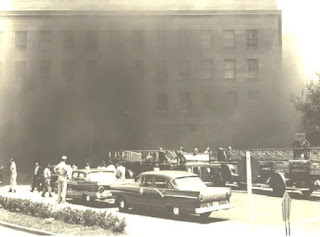 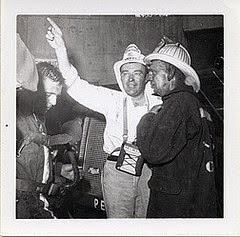 The fire evoked an image of Hell.

Aside from Sept 11, 2001 attack on the Pentagon, one of the fiercest fires to test the Arlington County Fire Department broke out deep in the basement of Defense Department headquarters, then the world’s largest office building, on July 2, 1959.

``It was one of the hardest fires to fight and one of the largest,’’ retired Battalion Chief James Fought recalled of the previous ``big one'' at the Pentagon. ``It was so deep in the building that it took 10 minutes to reach it and another 10 minutes to get out. Our breathing apparatus was only good for 30 minutes. That means we had only about 10 minutes to fight fire.’’

The flames erupted in a computer room operated by an Air Force statistical agency and burned for more than five hours – fueled by magnetic tape. There were no sprinklers. The blaze scorched 4,000 square feet and caused $30 million damage to the massive building and the computer equipment.

A history book published in 1976 by the NFPA – the National Fire Protection Association – to commemorate the U.S. bicentennial listed the Pentagon fire among the nation’s worst, including Boston’s deadly Coconut Grove blaze. ``Water on the floor was so hot you could feel it through your boots,’’ a firefighter told The Washington Star.

The General Services Administration fire department at the Fort Myer south post, located adjacent to the Pentagon, responded to the initial alarm at 10:45 a.m., according to retired Arlington firefighter Frank Higgins. At 11:05 a.m., the GSA firefighters requested assistance from the Army fire department at Fort Myer’s north post.

Upon arrival, Chief Alfred Kennedy of the north post called Arlington County. The time was 11:16 a.m.

More than 30 minutes had elapsed.

The county dispatched a box alarm assignment consisting of three engine companies, two ladders and Fought, the duty battalion chief. Fought was paying a visit to the Cherrydale fire station a few miles to the north when the military firefighters requested assistance.

Within minutes of his arrival, Fought struck a second alarm – and then a third. Clements then requested mutual aid at 11:51 a.m., according to Higgins.

The District of Columbia Fire Department dispatched a full second-alarm assignment. The City of Alexandria and Fairfax County in Virginia sent help. Help also came from Maryland fire departments. Montgomery County, Prince George’s County and Andrews Force Base sent men and equipment. In all, 300 firefighters and more than 70 pieces of apparatus responded.

Conditions were punishing. The stacks of computer tape burned violently. ``We would put out part of the fire and then find it had started all over again,’’ Ollie Willoughby, a D.C. firefighter, told The Star. The flames were extinguished only after firefighters broke through the Pentagon concourse with jackhammers, releasing pent-up heat.

The delayed alarm contributed to the fire’s spread. ``If we had had the opportunity to get there we might have reduced its effect,’’ Clements told the Star. In the UPI dispatch, Clements was also quoted as saying:  "A guard had my boys hook up their hoses to a standpipe located a full half-mile from the site," despite a prior agreement.

Four members of D.C. Rescue Squad 1 ``were stricken within half an hour by the noxious fumes they met in the darkness and confusion,’’ the Star reported. More than 30 firefighters were sent to hospitals. Dozens of others were treated at the scene.

Harold LeRoy, former chief of the Jefferson District Volunteer Fire Department, said the one image that sticks in his mind about the fire was Arlington firefighter Eddie Dodson, who emerged from the basement after taking a beating. ``He sat down on the running board of the wagon – and promptly lit a cigarette,’’ LeRoy said with a chuckle in a 1999 interview.

Damage to the computer equipment was so severe that IBM advised the Air Force: ``Take everything that belongs to us and send it to the government dump,’’ the Star said. The smoky blaze erupted in a computer room operated by an Air Force statistical agency and burned for more than five hours. It scorched 4,000 square feet and caused more than $7 million damage, according to the National Fire Protection Association.

Press reports at the time indicated there was no loss of life.

In July 2015, the Arlington Fire Journal received information to the contrary:

I read with great interest, the article about the fire at the Pentagon which took place July 2nd 1959.

I was surprised to read that "miraculously, no one perished", because in fact, my grandfather Horace L. Woodward Sr. died at his home, at 1611 Army Navy Drive, as a result of smoke inhalation from the fire.

He was at the Pentagon when the fire occurred and helped many people out of the building, after which he left the scene and went home where he then collapsed.

My grandmother, Olga Woodward, then called their doctor, who, after examining him gave him an injection of something (possibly digitalis?) which caused my grandfather to awaken and exclaim, "What are you doing to me?"

He then collapsed and died. Perhaps he would have survived, had he stayed at the scene and been treated by the medics there, or if he had died there he would have been rightfully counted as the lone casualty of the fire.

I was only seven years old at the time, and our family lived far away in New Jersey.

I've always considered my grandfather to be a hero for the way he helped others without concern for his own safety. Regards,