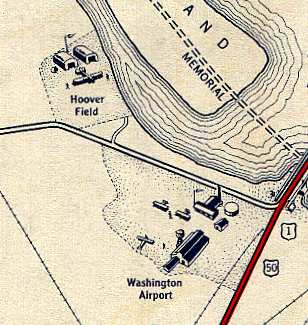 Tragedy struck long ago on the banks of the Potomac River, near an amusement park called Arlington Beach. The park, which featured swimming, rides and games, was located just north of the Highway Bridge, predecessor of today’s 14th St. Bridge.

Shortly after dark on June 6, 1928, a monoplane on a test flight from Hoover Field, a predecessor to National Airport, went into a tailspin at an altitude of 800 feet over Arlington Beach – and crashed near the park on a government experimental farm. (Another field, Washington Airport, was located nearby and merged with Hoover Field in 1930.)

Details of this long forgotten incident come from a logbook kept by the members of the Arlington Volunteer Fire Department between 1927 and 1930. The logbook was uncovered recently by Robert Potter, president of Company 1.

In the late 1920s, the volunteers operated a 1924 Model T Ford chemical wagon and a 1927 Rio engine that could pump 350 gallons of water per minute. The rigs were designated Truck No. 1 and Truck No 2, presumably in the order in which they were manufactured.

Part of the logbook entry reads:

``Call to Arlington Beach airplane on fire. … Airplane fell catching on fire killing one man and one died on way to the hospital on No. 2. From hospital was carried to morgue. … Fell on the U.S. Farm near Arlington Beach.‘’

Truck No. 1 and Truck No. 2 responded to the alarm, which came in at 8 p.m., and firefighters used 42 ½ gallons of chemical from Truck No. 1, according to the logbook. The crews went back in service at 9:45 p.m.

It is not clear whether other fire companies, such as Jefferson District or East Arlington, responded to the alarm.

Company 1’s apparatus was housed in an old wooden building next to a bank at Columbia Pike and what is now called Walter Reed Drive, according to a history of the company written by the late Edward Dodson. So it was probably a fairly brief run down Columbia Pike to the crash.
A check of the newspapers from the next day – June 7, 1928 – provided more details about the victims.

The pilot of the aircraft, Keith Keeling, 30, from Kansas City, had been a licensed pilot for 10 years and ``was regarded as an exceptionally safe driver,’’ according to a United Press dispatch published in The Alexandria Gazette. The other man, Clay Goodrich, 23, was an aviation mechanic and a student pilot, the UP said.

Goodrich, the mechanic, ``was crushed under the motor of the monoplane and his body was not extricated for more than an hour,’’ according to an Associated Press dispatch published in The New York Times. Keeling, the pilot, ``was rescued from the plane by the Arlington County, Va., Fire Department but he died on the way to the hospital,’’ the AP said.

The monoplane was made in Alexandria. The name of the manufacturer wasn’t listed, though at that time a number of aviation companies sprouted up across the country, much in the same way computer and Internet outfits spring up today.

In another incident, a twin-engine cargo airplane on approach to Runway 15 at National Airport crashed in Roaches Run waterfowl sanctuary on July 2, 1970, killing the pilot and co-pilot.

The aircraft was carrying radioactive material for medical use, according to The Washington Star. Retired Fire Capt. Al Stutz, then a private, was among the first on the scene. ``We had nothing to go on except some witnesses,’’ Stutz said. ``There wasn’t any visible sign of the plane’’ though ``the ducks, geese or whatever they were raised all kinds of hell.’’

An off-duty member responded to the scene with his personal boat.
Posted by ARLINGTON FIRE JOURNAL at Friday, February 11, 2005