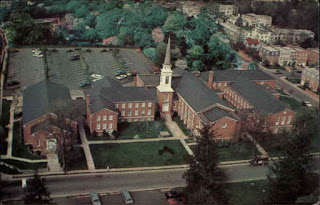 On 24 May 2006, at 1058 hours Box 4603 was struck for a structure fire at 103 West Columbia Street, Columbia Baptist Church (Falls Church). This church is a large complex consisting of several different interconnected buildings fronting on four streets. The church houses and hosts quite a few ministries including 250 pre-school children. The fire was in a storage area above the pulpit area of the main sanctuary.

EMS 112 arrived on the scene within three minutes reporting smoke showing from the eves on the W. Jefferson Street side. He designated this side Adam and established command. He quickly called for a second alarm. Engine 106 arrived and stretched a handline to the second floor through a doorway on the Baker side, quadrant Adam. Truck 106 took a position on side David. They positioned the aerial to the roof and raised numerous ground ladders on side David and Baker. The crew proceeded inside to assist Engine 106. Engine 102 reversed laid a supply line for Engine 106 and the crew advanced the backup line from Engine 106 to the second floor.

Battalion Fire Chief 112, Blankenship, established the command post at the buggy across the street from side Adam. Truck 104 positioned on Side Charlie, raised the aerial to the roof and assisted with ventilation. BFC 111 was designated the interior division. Medic 102 established an aid station on the Adam side and later established the rehab division. Units on the interior had no difficulty locating and extinguishing the fire. The fire was knocked down in ten minutes and completely out in twenty minutes. There was no extension above the fire room.

The second alarm units were ordered to report to command on arrival. Engine and Truck 410 relieved Engine 106, Engine 102 and Truck 106 on the second floor. I do not know the other companies assignments.

The fire was in an area above the pulpit in a 15’ X 15’ concrete room. It was used for storage. The all concrete construction held the heat for quite awhile but it did not present any problems. The location of the fire room allowed for fairly quick smoke removal from the fire area but unfortunately it dissipated into the sanctuary.

As is found in a lot of churches the sanctuary was approximately 50’ high and proved challenging for smoke removal. Smoke removal was accomplished by strategically placing several positive pressure fans. There was some minor smoke travel in other areas of the church that mostly dissipated on its own. Fairly late in the operation a crew from 418 went to the roof to check for extension.

All building occupants including the 250 children self evacuated and were accounted for very early on in the incident. It must be stated that for the teachers to control and account for 250 children is a testament to their responsibilities. They maintained control of the children without incident.
Posted by ARLINGTON FIRE JOURNAL at Tuesday, May 30, 2006