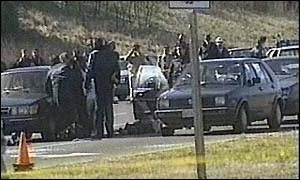 The Arlington County Fire Department responded on the ``mutual box'' and helped Fairfax County paramedics and firefighters treat the casualties.

''I looked through the 'blog' ... and there is one incident of national significance, to which some of the ACFD units responded which is not mentioned. I don't remember the exact date, but in the winter of 1992/3 (I think) Medic 106 ("A" Platoon, Mark Girard and Clayton Deskins) and EMS 72 (Miguel Serra) responded to the CIA building in Langley, Virginia to assist Fairfax County units with multiple shooting victims. (This may very well have been the first ``Islamic terrorist'' attack on U.S. soil ... It was before the 1993 Trade Center bombing.) Medic 106 treated and transported one of the survivors to Fairfax Hospital. EMS 72 assisted Medic 106 and other units on the scene.''

Kamil fled the county and was arrested four years later in Pakistan.

``FBI Deputy Director William J. Esposito and Acting Director of Central Intelligence George J. Tenet today announced the apprehension of Mir Amal Kansi, an FBI Top Ten Fugitive and the suspected gunman in the January 25, 1993, attack outside Central Intelligence Agency headquarters which killed two CIA employees and wounded three others. Kansi has been delivered abroad by Afghan individuals to the custody of United States authorities. He has been transported to the United States where he will face trial in Fairfax, Virginia. ''

Kansi was convicted and executed by the Commonwealth of Virginia.
Posted by ARLINGTON FIRE JOURNAL at Wednesday, December 21, 2005 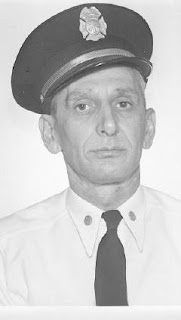 The county hired Fought as a full-time paid firefighter in 1943 and he advanced through the ranks to become one of the county's first battalion chiefs in 1956.

He spent his career ``on the road'' as he liked to say, supervising fire and rescue operations.

``The fire won't wait for you!'' the quintessential chief would tell his firefighters.

Fought helped supervise firefighting operations at a general-alarm fire in the basement of the Pentagon on July 2, 1959. That fire was listed as among the nation's worst in a book published by the National Fire Protection Association in 1976 to commemorate the bicentennial. A number of firefighters were injured at the 1959 Pentagon fire.

He also supervised the daring rope rescue of a 12-year-old boy who fell into a deep well at a construction site in Rosslyn on June 11, 1959.

Earlier as a fire captain, Fought was in charge of the county's old ``Squad 5’’ that responded to a pair of disasters in Washington on Jan. 15, 1953 - ``Black Thursday'' - the day a runaway Pennsylvania Railroad train plowed into the concourse at Union Station, and a later unrelated explosion at the Standard Tire and Battery Store in Northeast Washington that injured a number of D.C. firemen.

He was also among Arlington firefighters sent to the district for the riots in April 1968.

Fought, a member of the International Association of Firefighters Local 2800 in Arlington, retired in 1972.

He remained active in firefighting circles until his death and co-founded the Arlington County Fire Department Historical Society with the late Robert ``Cuz'' Carpenter, also a retired battalion chief, in the 1990s.

The chief helped with the compilation of the historical society's ``Red Book,'' a history of the fire and rescue service in Arlington County. He also contributed to the ``Arlington Fire Journal’’ newsletter.

Fought was also an active member of ``The Chowder Club'' and ``The Lunch Bunch'' - social clubs for retired members of the fire department.