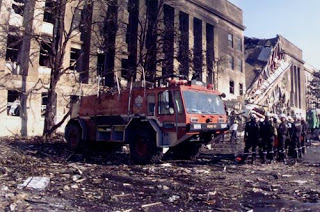 The following is an excerpt of an Associated Press story by Brett Barrouquere on Sept. 10, 2013, to mark the 12th Anniversary of the terrorist attacks of Sept. 11, 2001:

As a retired colleague told the story of how fire truck Foam 161 was damaged on Sept. 11, 2001, Mark Skipper examined the charred remains of the vehicle, cut a grin and expressed amazement that the crew lived through the terrorist attack.

That day at the Pentagon forged a special friendship between Skipper, who works at Naval Support Activity Mid-South in Millington, Tenn., and now-retired firefighters Al Wallace and Dennis Young, who spent the day of the terror attack sifting through rubble and helping people escape the burning military headquarters.

"It's been hard to come back and see this, but I've got my friends here," Skipper told The Associated Press. "It's just a personal bond."

The three men reunited Sept. 10, 2013, at Fort Knox, Kentucky, to view their former truck for the first time in 12 years.

With its rear driver's side still charred and melted, Foam 161 is going on display at the Gen. George S. Patton Museum and Center of Leadership at Fort Knox.

Patton Museum Curator Nathan Jones said the truck will be part of an exhibit highlighting leadership issues that arose from the attacks.

The three firefighters stay in regular contact and see one another periodically.

Wallace, the truck driver on the day of the attacks, is the storyteller of the bunch.

Wallace described how he, Skipper and Young saw the plane and heard the crash from the Fort Myer Fire Station just yards from the west side of the Pentagon.

"It's a wonder Skipper and I weren't cut to shreds," he said.
Posted by ARLINGTON FIRE JOURNAL at Wednesday, September 11, 2013 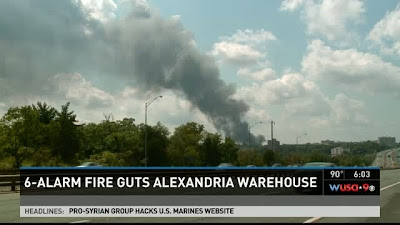 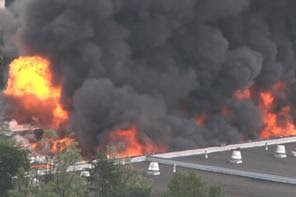 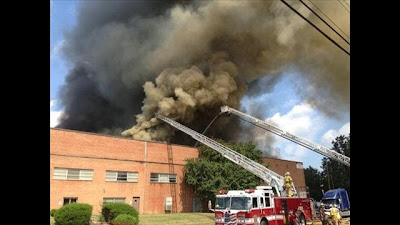 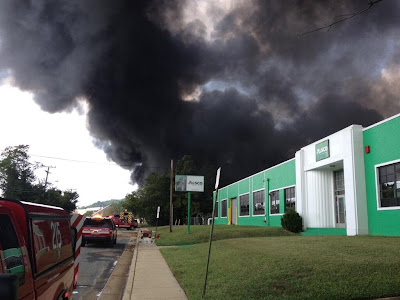 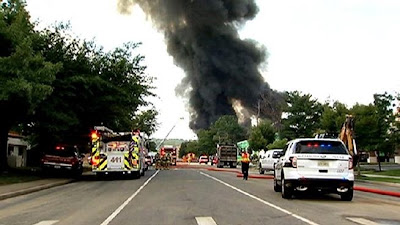 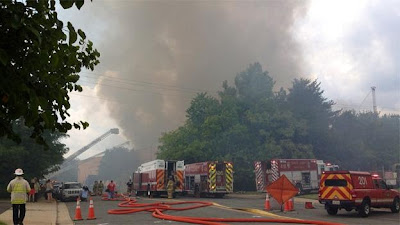 It was no accident.

On Labor Day 2013, a 6-alarm fire destroyed a warehouse at 801 South Pickett St., Alexandria - one of the largest blazes in Northern Virginia in more than decade.

Firefighters from the City of Alexandria, Arlington County, Fairfax County in Virginia, along with Prince George's County, Maryland, battled the flames on the Labor Day holiday.

Crews contended with a broken water main near the blaze and a roof collapse.

There were no serious injuries.

The Sept. 2 incident was one of the largest for Northern Virginia's firefighters since the Pentagon attack in 2001.

On Sept. 10, Alexandria Fire Chief Adam Thiel announced investigators concluded the fire was deliberately set. "We ruled out any of the accidental causes," said Thiel,  quoted by WJLA Channel 7. "It was not an accidental fire."
Posted by ARLINGTON FIRE JOURNAL at Monday, September 02, 2013 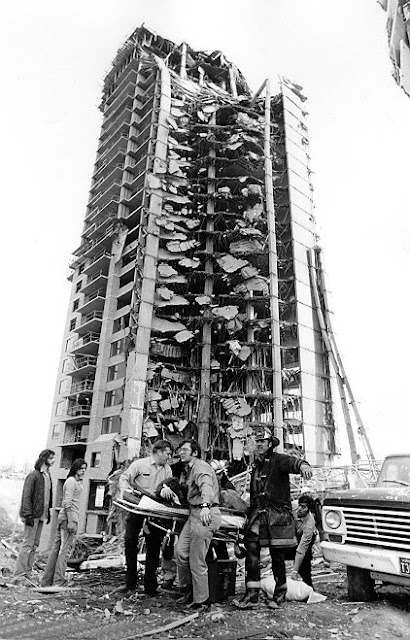 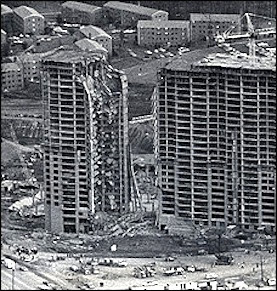 The rumble could be heard for miles.
On March 2, 1973, the center section of the 24-story Skyline Center in Bailey’s Crossroads, which borders Arlington, gave way.

The cascading concrete and steel killed 14 people and injured 34 others.

Engine 6, Truck 6 and Rescue 6 responded from Falls Church along with Fairfax County units, according to John Franklin, a retired Arlington firefighter who was assigned to Rescue 6 that day.

"Back in 1973, Station 6 was also dispatched by Fairfax and was on the scene before Arlington was asked to send units," said Franklin, who retired in 2000 after 30 years on the job. Arlington County answered Fairfax County’s request for mutual aid with four ambulances – Rescues 1, 4, 5 and 10 – and Engine 9.
Truck 3 and the foam wagon were also dispatched, with the foam wagon carrying the Arlington County recruit class.
A canteen wagon operated by the ladies auxiliary of the Arlington firefighters’ union also provided assistance.For Fairfax County, the recovery effort would continue for two weeks, when the last body was recovered.

Following is a wire service report on the incident:

Bailey's Crossroads, Va. (UPI) -- A huge unmanned crane plunged through 23 stories of a building under construction in a suburb of Washington Friday, slicing the structure in two as it crashed through floor after floor into the basement. At least six persons were killed and 34 injured.

An undetermined number of workmen were missing and feared buried under tons of concrete rubble.

Several survivors were plucked off the remains of the roof by a helicopter. Another was located buried under the rubble but still alive, and fed oxygen through a tube by a disaster team from a nearby hospital.

A scratching sound also was heard late Friday under an adjacent garage that fell in when the main building collapsed.

The crane toppled over on the top of the building and with a thundering roar "like an earthquake," plummeted through floor after floor as workmen below ran for their lives.

Firemen from 14 suburban companies stood by protecting against the possibility of a flash fire or explosion from leaking propane gas tanks buried under the tons of concrete.

"This is going to take all night or even all day tomorrow," said a Fairfax County official. "It may be two or three days before we know for sure how many fatalities there were."

"Some of the men who are now missing might be home having a beer, some who we thought were missing have called in from home," he said.
Several survivors were plucked from the top by an Army helicopter after tossing crumbled notes to the ground pleading, "Please for God's sake, get us off this building." 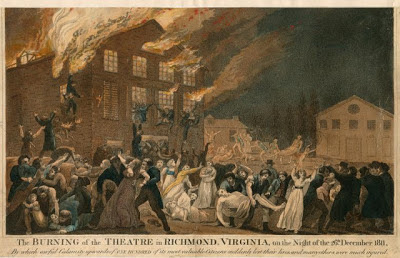 Firefighters were unable to stop the inferno and the building collapsed.

The theater was located on the north side of Broad Street between what is now Twelfth and College streets.
Posted by ARLINGTON FIRE JOURNAL at Thursday, June 27, 2013


In the 1800s and into the early 1900s, boiler explosions were a common occurrence.Across the U.S., there were 499 boiler explosions reported in 1911, accounting for 222 deaths and 416 injuries, according to statistics from the Hartford Steam Boiler Inspection & Insurance Co. as reported by the Journal of The Cleveland Engineering Society, May 1913.
In Washington, D.C., a boiler exploded at the McCrory's store at 416 Seventh Street, Northwest, killing six people and injuring many others on Nov. 21, 1929.

Passersby were among the victims.

"The explosion lifted part of the concrete sidewalk about 40 feet square in the air," according to an Associated Press dispatch in the Ellensburg Daily Record in Washington state.

"Firemen arriving immediately began digging beneath the ruins for bodies," the AP reported.

"Steam poured upon the cavity upon a score of firemen as they worked feverishly to lift the huge blocks of concrete which had fallen," AP said.

The incident went to four alarms.

Police detective Benjamin Keuhling, who was in the neighborhood when the boiler exploded, told the United Press:

"I saw a man hurled 30 feet, and a woman shoot straight up in the air. It was a miracle that at least 20 persons were not killed." 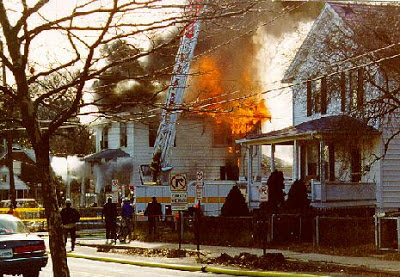 Photo: Falls Church Volunteer Fire Dept.
House fire at North 13th and Stafford streets in the Ballston area of Arlington, Virginia, in January 1999. The plume of smoke was visible for miles. Firefighters were briefly trapped in the basement of the burning dwelling. A quint (probably Quint 104) has its aerial extended.
Posted by ARLINGTON FIRE JOURNAL at Wednesday, June 19, 2013 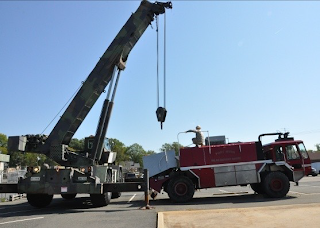 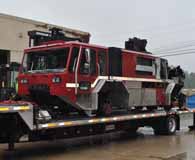 The vehicle - designated Foam 161 - was stationed at the Pentagon firehouse on Sept. 11, 2001 and sustained heavy damage in the crash of American Airlines Flight 77.