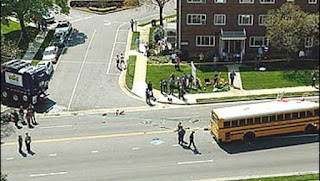 Horror and heartbreak on Columbia Pike.

An Arlington County school bus bound for Hoffman-Boston Elementary School collided head-on with a trash truck April 18, 2005. Firefighters and bystanders worked to free the 15 children on the bus in the midst of the morning rush hour.

A 9-year-old girl died at the scene and a 7-year-old boy succumbed to his injuries two days later.The bus driver, the driver of the AAA & Rainbow Recycling and Trash Removal Service truck and an 11-year-old child girl were admitted to hospital with serious injuries. Other children suffered less severe injuries.

The victims were transported to Children's Hospital in Washington, Virginia Hospital Center in Arlington and Inova Fairfax Hospital in Falls Church. The children ranged in age from kindergarten to Grade 5.

The school bus was traveling west in the far left lane of Columbia Pike and attempting to make a left turn onto South Courthouse Road when it was hit by the eastbound blue trash truck equipped with a front-end loader, according to The Washington Post.

The impact crushed the front of the yellow bus. The trash truck careened into a tree, pinning the driver.

Friends and relatives left flowers and stuffed animals at the site of the tragedy.

Lilibeth Gomez, a third grade student, was prononced dead at the scene. A red tarpaulin covered the section of the bus where the child died. Her body was removed about two hours later. The following day, the Post published a front-page photo of Lilibeth, smiling and clutching a puppy. Witnesses said she was seated two rows behind the bus driver.

Ryan Jakovich, 8, sat across from Lilibeth, according to The Washington Times. The boy ``saw everything," said his mother, Ellen Jakovich, quoted in the April 19 edition of the Times. "It's slowly sinking in for him. He saw a couple of kids not moving. He said to me, "Mom, they were just lying there.'"

The accident renewed the debate over mandatory use of seatbelts on school buses. The bus wasn't equipped with the safety devices. Two days later, police in neighboring Alexandria investigated another school bus wreck. There were no injuries in that accident.

The following weekend, county police and National Transportation Safety Board investigators closed the intersection of Columbia Pike and Courthouse Road and re-enacted the chain of events leading up to the tragedy, using a similar school bus and a similar trash
truck.

The response to the accident was equivalent to that of a two- or three- alarm fire.

According to the web site mutualbox.com:

The incident brought numerous engine companies from Arlington, both truck companies and rescue squads along with Rescue 206 from Alexandria. (Operations Chief Ben) Barksdale was the incident commander with divisions and groups handled by battalion chiefs and captains. There were two helicopters also called to the scene.

Another report on the accident from Fire Station No. 3's web site said:

Engine 101, Tower 105 (the first-due units) and Battalion 111 (Chief Randy Gray) arrived almost simultaneously. Chief Gray declared a "major emergency" ... The driver of the trash truck was pinned in the mangled wreckage of his cab for over an hour. The crews from Rescue 104, 109, Rescue Engine 161, Tower 105 and Rescue 206 worked feverishly to free him. Every tool in their extrication arsenal was used on this job.

Arlington County Fire Chief James Schwartz said ``a number of citizens'' helped rescue children from the wreckage, according to the Associated Press. Many were lifted from the rear emergency exit. Firefighters, meantime, spent 30 minutes freeing the truck driver from his twisted cab. He was evacuated by helicopter to Fairfax Hospital.

Willena Roney, 43, from Arlington, Va., was riding a Metrobus that came upon the gruesome accident scene. She and three others got off the Metrobus and started pulling children out of the school bus.

"A lot of them were bleeding," Roney said. "They were scared and upset."The Post offered this account:

The driver of the mangled school bus sat on a curb, bloodied and screaming, as emergency workers and others tended her injuries and tried to calm her. Suddenly, she sprang to her feet and darted back to the bus to try to help the injured children.

Dozens of others -- office workers, a Metrobus driver, nearby residents, firefighters, paramedics -- also rushed to the school bus, knowing that children were trapped inside.

Jenae Johnson, 28, said she heard the piercing squeal of brakes and whirled around to look out the third-story window of her apartment in the Dorchester Towers on Columbia Pike. Johnson dialed 911. As she waited for an operator, she watched as commuters jumped from their vehicles and flooded from their apartments to help the injured. Johnson recalled the heroism of one woman in particular, who ran from her car to help. "She kicked off her shoes, opened the back of the bus and started helping children out," Johnson said. "She was amazing.

Parents rushed to the school as news of the accident spread through the community. Others telephoned the school.

An accident this morning involving an Arlington Public School bus and a trash truck resulted in one fatality. Parents of children have been contacted.

A total of 17 people were involved in the vehicles; two adults, who were driving the vehicles, and 15 children. One child was fatally injured. Four patients including the two adults and two children were critically injured. The truck driver was evacuated by helicopter.

All passengers have been transported to local area hospitals. Arlington Public Schools counseling teams are assisting parents at the hospital and children and staff at the school.

`Very sad day for all of us'

Later in the day, the school system issued another statement:

Nine-year-old Lilibeth Gomez was killed in a collision this morning just before 9 a.m. between an Arlington Public Schools bus and a commercial trash truck. She was a third-grade student at Hoffman-Boston Elementary School.

“Today is a very sad day for all of us in Arlington,” said Arlington School Superintendent Dr. Rob Smith. “My deepest personal sympathies go to the Gomez family; I cannot imagine the heartbreak that this family is going through. I know everyone in the community will keep all the students and families in their hearts and in their thoughts.”

Arlington Public Schools will continue to provide counseling and support to Hoffman-Boston parents, students and staff. Arlington’s Department of Human Services will have outreach staff available for anyone in the community who needs additional assistance.

In July, the drivers of both the bus and the truck were charged with reckless driving, according to press reports. Investigators had ruled out major mechanical problems.
The bus and the trash truck were hauled to the Arlington County equipment yard for examination by the National Transportation Safety Board after the accident, The Washington Post reported April 20.

The turn signal on the mangled bus continued to tick, stuck at the moment of impact. Authorities said their investigation will be conducted in painstaking detail. They will take days, if not weeks, to inspect both vehicles, sift through the debris and interview witnesses.

"They're doing a very, very methodical and thorough investigation on this," said Arlington police spokesman Matt Martin. "It's going to take time."

The Washington Examiner, in its April 20 editions, reported:

A preliminary investigation by the U.S. National Transportation Safety Board revealed that the school bus was in its proper lane when the accident occurred.

The bus was preparing to make a left turn at the intersection, but had not yet begun to turn, when it was struck head-on by a garbage truck.

Tire marks "indicate that the bus was in its proper lane," said Debbie Hersman, an NTSB spokeswoman.