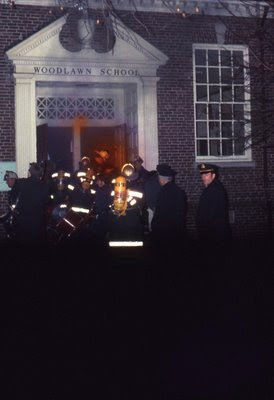 Photo: Falls Church Volunteer Fire Dept. web site
Crews on the scene of an April 1974 fire at the old Woodlawn School, which was located at 4715 North 15th Street. Today, the old school building is occupied by the Capital Hospice in-patient unit. Woodlawn School was merged into the H-B Woodlawn school in Cherrydale in 1978.
Posted by ARLINGTON FIRE JOURNAL at Wednesday, July 22, 2009 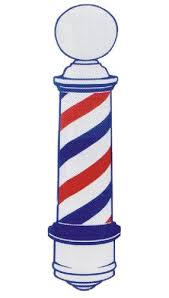 About 40 Arlington firefighters and the County Board got together to discuss hair lengths yesterday and, while the issue wasn't resolved quite as decisively as the Samson v. Delilah encounter, it managed to generate nearly the same intensity.

For about a month now, the country firefighters have been under orders to keep their hair - even when disheveled - above their ears and shirt collars under pain of suspension from the force.

Although no one has yet been suspended for non-compliance, the members of the Arlington professional mounted an energetic campaign to get the regulation rescinded.

Yesterday they went to the County Board's bi-weekly meeting armed with a lawyer Firefighters' Association have from the American Civil Liberties Union (ACLU), about 50 formal grievances filed by members of the force and a petition signed by more than 1,000 Arlington County residents protesting the regulation.

The Controversy also brought a letter of support from Arlington Del. Ira M. Lechner and a message from Del. Marry A. Marshall (D-Arlington) delivered in person by Del. Warren G. Stambaugh (D-Arlington) who added a few words of his own.

Marshall, Stambaugh said, asked the Board members to consider the fact the Commonwealth of Virginia was "found by long-haired cavaliers" who fled England to escape Oliver Cromwell's roundheads.

County Board meetings in Arlington are usually rather fervent affairs in which the room fills up quickly with ardent citizens who can debate trash collections and site plan amendments for hours with passionate intensity.

Throughout meetings the Board members sit benignly under the watchful eye of County Manager Vernon Ford whose impassivity has been known to remain intact through raucous laughter and righteous indignation alike.

Before the Board ultimately decided to follow Ford's advice that the hair regulation was an administrative matter that the Board should not take a position on, Ford found that calm reason alone would not carry him through the day.

After listening to the firefighters' lawyer, David Rosenfeld, exceed his allotted five minutes by about 20 more of the same, Ford said, "I find I just have to express this feeling.I don't want to bottle it up any longer. I feel that you (the County Board) have been abused and I have been abused (by the length of Rosenfeld's presentation) and I don't think it's right."

Rosenfeld challenged Fire Chief Robert F. Groshon's contention that the new regulations were needed to protect the men from harm while they were doing their jobs and handed out copies of other jurisdictions' hair length regulations.

These allow hair lengths at least two inches longer than the Arlington edict.

"Not one of the firemen here today wants to go into a fire and commit suicide," Rosenfeld said.

In addition, Rosenfeld said he saw a certain contradiction in the department's concern for the men's safety.

The attorney set a strand of hair on fire to prove the point.

After the hair demonstration, Rosenfled set fire to a piece of blue cloth that he said came from an Arlington County firefighters' uniform, which was worn on the job.

The material was soon blazing in a nearby ashtray.

Groshon, on the other hand, contested the firefighters' assertion that they should be able to wear their hair in any style as long as it was covered by the liners of their helmets, shick extend slightly below their ears.

Presenting the Board with pictures of his men in action, Groshon said that the firefighters do not wear their liners over their ears on duty and that it was his job to make sure that a person carried out of a burning building isn't dropped because a firefighter's hair was on fire."

Groshon said that one reason ascribed was because "my son has long hair and I can't get him to cut it."

Groshon said, however, that he would force his son to cut his hair if he got a job with the Arlington County Fire Department.

"This is the judgment you have to make," Groshon told the Board members. It was up to them to decide, he said, "whether I'm doing my job right. We could have like mine, but I understand the men wanting to be stylish."

On the urging of the County Board both sides agreed to continue the discussions in an effort to reach a compromise.

In addition, Groshon agreed to delay suspending any firefighters who didn't comply with the order for at least five days.

On a 4-to-1 vote, with John Purdy dissenting, the Board decided not to intercede in the controversy over the fire department's hair length regulation and left the final decision to Ford and Groshon.

After it was all over, the firefighters remained hopeful that their visits to the barbershop would not soon be increasing in frequency.

"We just want to fit into our communities and not stick out of place," said firefighter Albert Stutz.

The Board went into executive session.

The boys went out for a beer.
Posted by ARLINGTON FIRE JOURNAL at Wednesday, July 22, 2009