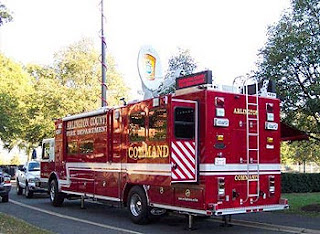 On Dec. 21, 2005, the Arlington County Fire Department placed its new Mobile Command Unit in service at Fire Station No. 2 in Ballston. The a 40-foot vehicle is outfitted with state-of-the-art communications equipment, a satellite dish and many other features.

The MCU - purchased with funds provided through the U.S. Justice Department, ``is a critical tool for the fire department during major incidents like 9-11.'' Arlington County Fire Department Chief Jim Schwartz said.

According to Station No. 3's web site:

The closing of Quint 104 will increase the call volume for Engine 103 by several hundred runs a year. We will now be second due into all of the Rosslyn area along with picking up first due in some of Quint 104's area. In Station 4's first due area all medical locals, public service calls, etc. will be handled by Rescue 104. All Northside Engine Companies can look forward to a significant increase in call volume to cover the huge void left by Quint 104 on all fire related incidents. Sleeping all night at Station 3 may be a thing of the past!

Station 4 will now be a "Specialty House" running Tower 104, Rescue 104, Medic 104 the North Battalion and Logistics Coordinator. Station 4 is also part of the Technical Rescue Team along with Station 10.

Following is a report from www.ffxfire.com

0326hrs 4th Alarm Box 1811 7316 & 7318 Lee Hy--E418 arrived to find a 3 story garden apt with fire on the 3rd floor and thru the roof. A second was quickly called with an EMS task force, the Helo and a 3rd alarm. A 4th alarm was called a few minutes later. One burn PT was located and flown to Medstar. Companies were pulled out of the building and several tower ladders were put to work to knock the fire down. A shelter was opened at the nearby Timber Lane ES as 80 people were displaced. Chief Coffman had the command. A-Shift

In another mutal box run to Fairfax County, Arlington County firefighters helped battle a two-alarm fire that leveled a mansion on Crest Lane in McLean on Aug. 17, 2005. NBC4 reported ``someone who lives inside the home has a connection to the United Arab Emirates.'' The Secret Service - charged with protecting diplomatic compounds - was called to the scene.

A baggage handler died in an accident at Reagan National Airport on June 7, 2005, according to news reports. National Airport and Arlington County firefighters responded to the alarm and found a worker pinned between a belt-loader and a US Airways aircraft parked at Gate 23 as the aircraft was being prepared for a flight to Chicago, according to the reports.

Evidence discovered by the Arlington County Fire Department led to the arrest of the man responsible for a two-year arson spree across the Washington area, including fires that killed two elderly women in the District of Columbia.

Thomas A. Sweat, 50, pleaded guilty to first-degree murder, second-degree murder and other charges June 6, 2005 in federal court in Greenbelt, Maryland, The Washington Post reported. He was arrested in April.

The biggest break came Dec. 5, when Arlington County firefighters recovered Marine Corps dress pants and a Marine hat near a small deck fire in the 300 block of North Bryant Street.

Capt. Tom Polera of the Arlington Fire Department said the items were found near the scene. The blaze was never reported to the news media, Polera said, because of the little damage it caused and because of the evidence left behind.

ATF officials said they learned about the Arlington fire two days after it occurred. They said they were not convinced it was connected to the serial arsonist but decided to submit the pants to the agency's crime lab for tests.

It wasn't until April 1 that they got the results: DNA from the pants matched DNA recovered from the two earlier fires and attempted arson in Maryland and the District, authorities said.

In a message to the department on April 27, Arlington County Fire Chief James Schwartz said: ``The lead investigator from ATF (the federal Bureau of Alcohol, Tobacco and Firearms) commented to me today that the case progressed in no small part due to the dogged determination of our fire marshals. Congratulations to OFM on a great job.''

On June 1, 2005, a suspicious two-alarm fire gutted the abandoned Duckpin Bowling Center at 400 South Maple Avenue in Falls Church - the same day demolition was scheduled to start to make way for a residential and commercial project.

The fire was reported at about 1 a.m. and the building was engulfed in flames when firefighters arrived, NBC News4 reported. Crews engaged in an ``exterior attack'' and video posted on NBC4.com showed Truck 106's aerial in action. No injuries were reported.

Captain Tom Polera, assistant fire marshal for Arlington County, told News4 that the old bowling alley's interior had been stripped for demolition. Electricity to the building had also been cut, Polera said.

The following equipment was dispatched, according to Fire Station No. 3's web site, www.acfd3.com :