Retired Fire Captain Robert Cuff used to joke that up until the 1980s, Arlington was just a small town – ``Mayberry on the Potomac.’’

Today, it merits its own skyline, and the fire department has become adept at dealing with fires and emergencies in high-rise buildings.

In 1985, two high-rise fires – about a week apart – merited an article in Firehouse magazine, written by Steve Marshall, a reporter at USA Today and a member of the Fairlington Volunteer Fire Department.

On July 19, 1985, a three-alarm fire damaged Crystal Mall No. 3 at 1931 Jefferson Davis Highway. Then on July 25, firefighters contended with another three-alarm job – a ``towering inferno’’ – that lit up the top floors of Olmstead Building, which was under construction at Washington Boulevard and Highland Street.

Both operations were ``complicated by problems of poor accessibility and insufficient water supply,’’ Marshall wrote. At the Crystal Mall, ``Arlington and Alexandria firefighters had to batter their way through metal-clad doors to fight a blaze in a secured U.S. Navy office,’’ Marshall wrote. At the Olmstead Building, ``firefighters found unfinished standpipes just beneath the fire floor.’’ The fires caused total damage in excess of $1 million. Another fire broke out at the Olmstead construction site a few months later.

On a Sunday afternoon in January 1987, fire erupted on the top floor of a high-rise building under construction at 1001 North Vermont Street, Ballston. Wooden shoring fueled the flames, increasing the danger of a collapse. Exploding propane tanks also complicated matters. Master streams from Truck 74 and Fairfax County’s Tower 1, as well as a monitor set up on an exposure, helped to contain the fire, which went to three alarms.

The first collapse occurred on June 6, 1968 at the Crystal City Mall, killing three construction workers and injuring 33 others – on the same day Senator Robert Kennedy died of a gunshot wound in Los Angeles.

``The collapse came just after concrete had been poured on a 120-by-40 foot deck of plywood and steel reinforcing rods to form part of the third floor,’’ The Washington Post said. ``An estimated 100 tons of wet concrete tore through the plywood decking and crumpled temporary supporting 4-by-4 jack posts like match sticks.’’

Retired firefighter Albert Stutz was on duty at Station No. 5 when the alarm was sounded that day. Following is his account of the collapse that occurred on the same day Senator Robert Kennedy died of a gunshot wound in Los Angeles.

``The talk all morning had been of Robert Kennedy being shot the night before. The call came in the mid- to late-morning and we were dispatched to 2000 Jefferson Davis Highway for a construction accident. That had been the old Hospitality House Motel. They were adding a parking garage. The construction entrance was on Eads Street. The foreman told us nothing had happened there.

``The fire dispatcher was notified that they didn’t have a problem. The dispatcher replied, `Try the other side of the highway. We have received in excess of 20 calls.’ When we went back out onto Jeff Davis there was no mistaking there was a problem. There were about 50 people waving us to the site. We had three or four firefighters plus an ambulance. Capt. Robert `Cuz’ Carpenter and I went up a plank to the second floor. He went to the right and told me to go to the left. `See what you find,’ Cuz said.

``Almost immediately I found a worker who was up to his throat in concrete. It took us six or seven hours to get that guy released. His position fooled us. We cleared the concrete straight down. But he was bent over. Our first attempts were useless. He wasn’t seriously hurt, but he was so numb he couldn’t tell us where his feet were buried. I talked to him the whole time and never got his name. I wish I had.

``Other things I remember from that day: One worker rode the collapse all the way down to the ground and wasn’t hurt. Another worker was freed fairly quickly and refused to go to the hospital. He soon thereafter died of shock. As we would come across one of the dead, a construction foreman would identify the body and then yell to someone to pull their timecard. They weren’t going to pay the poor dead guys 15 minutes more if they didn’t have to. That was the most morbid thing I saw that day. Probably the most touching thing I saw was the construction workers who worked their butts off to save their trapped comrades.’’
Skyline collapse

The rumble could be heard for miles.

On March 2, 1973, the center section of the 24-story Skyline Center in Bailey’s Crossroads, which borders Arlington, gave way. The cascading concrete and steel killed 14 people and injured 34 others.

Arlington County answered Fairfax County’s request for mutual aid with four ambulances – Rescues 1, 4, 5 and 10 – and Engine 9, according to retired Firefighter Frank Higgins. Truck 3 and the foam wagon were also dispatched, with the foam wagon carrying the Arlington County recruit class. A canteen wagon operated by the ladies auxiliary of the career firefighters’ union also provided assistance.

For Fairfax County, the recovery effort would continue for two weeks, when the last body was recovered.

The old Arlington County Courthouse burned on Sunday, April 20, 1990, destroying records in the county clerk’s office and causing more than $2 million damage to the seven-story structure at 1400 North Courthouse Road.

Box 7003 was transmitted at 3:59 a.m. for ``a fire on Courthouse Road, right next to the AMC Theatre,’’ according to the official dispatch log. First-due Engine 70 from the Rosslyn station arrived on the scene three minutes later and reported ``heavy smoke showing,’’ possibly from the old jail. At 4:03 a.m., Battalion 74 – Battalion Chief Floyd Walters – established command and ordered a second alarm.

The Washington Post reported: ``Firefighters initially had trouble pinpointing the location of the fire; at one point they responded to the fifth floor of the county jail after a smoke detector went off there. About a dozen women prisoners were evacuated to a stairwell.’’

At 4:16 a.m., Clarendon’s Engine 74 transmitted ``emergency traffic – fire on the fourth floor of the old courthouse,’’ according to the dispatch log. A third alarm was transmitted at 4:23 a.m. Crews located the fire in a secure room in the clerk’s office. A double door and combination lock sealed the chamber. Firefighters breached a wall to gain access, but were pushed back by the flames. In the meantime, Crystal City’s Tower 75 was raised and started pouring water on the blaze. By that time, though, the flames had extended through the ceiling to a fifth floor law library. The time was 4:44 a.m.

The grueling attack continued as crews contended with the fire on the fifth floor as well as hotspots and rekindles on the on the fourth floor. At 6:23 a.m. Chief 71 – Chief of Department Thomas Hawkins – declared the fire under control.

The Cherrydale volunteer’s Light Unit 73 provided electricity for the lengthy salvage and overhaul job that extended into the afternoon and was complicated by the discovery of asbestos insulation in the building.

The fire gutted Circuit Clerk Court David Bell’s private office. Dozens of records in both civil and criminal cases were destroyed. In addition to extensive fire damage on floors No. 4 and No. 5, smoke and water damaged third-floor courtrooms. Jail inmates, wearing orange jumpsuits, assisted with the cleanup. The fire marshal’s office suspected the cause of the fire was a leaky toilet on the fifth floor of the building, which caused a short circuit in an electrical outlet in the clerk’s office, fire Lt. Steve Hynson told the Post.
Posted by ARLINGTON FIRE JOURNAL at Friday, February 11, 2005 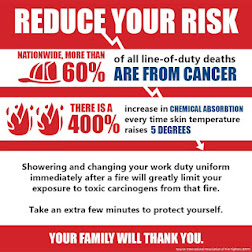