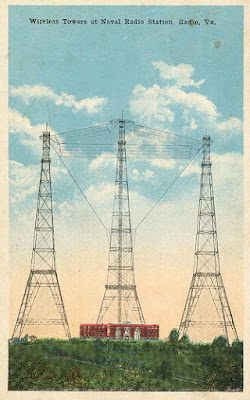 Fire department records from the 1920s and 1930s list a variety of fire alarms at Radio, Virginia – a neighborhood named for the old U.S. Navy Wireless Station in the vicinity of Columbia Pike and Courthouse Road.

A trio of radio antennas – known to locals as ``The Three Sisters’’ – towered over the neighborhood. In their day, the antenna towers were the world’s tallest. One of the towers was 45 feet taller than the Washington Monument. The Navy opened Radio Arlington, call sign NAA, in 1913, launching the U.S. military’s global communications system. A streetcar stop was even named ``Radio.’’

Old Radio Arlington marked the first time the term ``radio’’ was used in communications, according to Nan and Ross Netherton’s book ``Arlington County in Virginia: A Pictorial History,'' which was published in 1987. In the days of Marconi and other radio pioneers, the new communications mode was called ``wireless telegraphy.’’

Radio Arlington’s other firsts included a transoceanic radiotelephone circuit with a wireless station at the Eiffel Tower in 1915, and regular broadcasts of time signals, a service that helped ships at sea calibrate their navigational equipment.