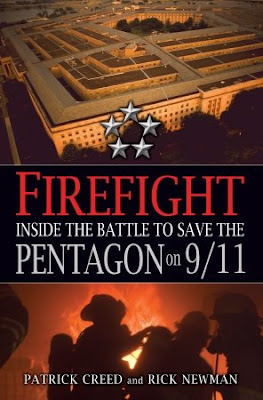 It burned, too, dismembered by the same terrorists who brought down the twin towers of New York's World Trade Center. Circumstances, though, have rendered the Pentagon a Sept. 11 afterthought. It's the place that survived.

At the World Trade Center, 343 New York City firefighters died. At the Pentagon, every firefighter returned home. But not all came back safe and sound. The Arlington County Fire Department subsequently lost 9 percent of its force to health-related retirements.

The FDNY battalions marched into the World Trade Center and were entombed there. The Arlington crews subdued a different beast, smaller but still lethal, and in their victory they've remained largely anonymous.

Six years on, the Arlington firefighters and their compatriots are getting the accounting they deserve.

In "Firefight: Inside the Battle to Save the Pentagon on 9/11," authors Patrick Creed and Rick Newman detail what happen- ed after American Airlines Flight 77 flew into the nation's military command center at 530 mph, killing 189 people, including the 64 people aboard the jet.

The plane hit at 9:37 a.m. It weighed 182,000 pounds, carried a bit less than 11,000 gallons of jet fuel and plowed forward, Creed and Newman write, "like a horizontal volcanic eruption." In eight-tenths of a second, the plane disintegrated. Six- hundred-thousand bolts and rivets blew out as shrapnel. The concussion rattled fire station doors nearly a mile away.

"What the (expletive) was that?" Arlington firefighter Derek Spector exclaimed.

"That was a (expletive) explosion," firefighter Brian Roche replied.

That's how firefighters talk. The way anyone talks when they have been hit in the gut.

One example, recounted in "Firefight": An exhausted Arlington crew was resting in the Pentagon courtyard when several District of Columbia firefighters tried to steal the crew's air packs and face pieces.

About such perfidy, only one thing could be said.

A lot, too, can go wrong in reporting such a story.

Misimpressions can coalesce into convenient anecdotes. The facts can grow soggy with sentiment. The fraternal order of those who were there fends off feelers from those who were not.

"Firefight" seems to get it right, as best I can tell.

Everything gets its proper measure. Mistakes happen, but steadfastness is the enduring virtue. At one point, an ailing firefighter sneaks behind an engine to vomit, knowing that if the medics see him, he'll be yanked off the biggest job of his career.

Technical competence is esteemed. When hulking Truck 105 couldn't fit through a Pentagon tunnel, officers cut the rear tiller cab off with an electric saw. The truncated vehicle squeezed through with two inches to spare.

Creed and Newman appear well-suited to capturing this story.

Creed is a volunteer firefighter and Army civil affairs officer.

He's obviously got heart. At one point, after Creed deployed to Iraq, he conducted one evening interview with an Arlington firefighter by satellite phone while his base was under mortar attack.

Newman is a reporter for U.S. News & World Report, a former Pentagon correspondent and the author of another book.

One of their Arlington sources is Capt. Joe Lightfoot, who once ran the fire station where I've ridden as a volunteer EMT since 2002. Hanging out in Station 2's kitchen, waiting for the emergency tones, Lightfoot and I have talked about, well, whatever: Iwo Jima, say, or Hillary Rodham Clinton's latest melodrama, or Led Zeppelin's personnel dynamics. In time, we also talked about the Pentagon. In every profane and poignant particular, Lightfoot's experiences as I heard them are faithfully recounted in "Firefight." So are many others.

Detail abounds here, and 486 pages may weigh down some readers. Inevitably, the drama that's white-hot at the beginning flags a bit by Day 8 or 9. It's a big story, though, and not just on the surface. It takes space to delve into an event so complicated. It takes space, too, to plumb the heart of a man; a man, say, such as Arlington Battalion Chief Bob Cornwell.

Cornwell fought in Vietnam a generation ago. Five months before Sept. 11, he had a tumor removed. His debilitating chemotherapy for non-Hodgkin's lymphoma was barely done when the Pentagon was hit. He easily could have checked out of the fight. Instead, he was running all over the building, weighed down by 45-plus pounds of turnout gear and air pack. When he finally was ordered to rest at the command post, he declined. He'd stay with his men, "Firefight" recounts.

Remember: Steadfastness is a virtue. "Firefight" gives it its due.