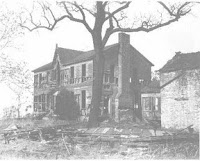 On March 5, 1930, flames gutted Abingdon Plantation, birthplace of Nellie Custis, the mother of Martha Washington. ``The Jefferson District Fire Department responded to the alarm, but was unable to lend any aid owing to the lack of water,’’ a newspaper account said. The house - built in 1695 along the Four Mile Run - had been in disrepair. Today, a plaque marks the site, which is on the grounds of National Airport.
PHOTO: Alexandria Public Library
Posted by ARLINGTON FIRE JOURNAL at Wednesday, May 28, 2008