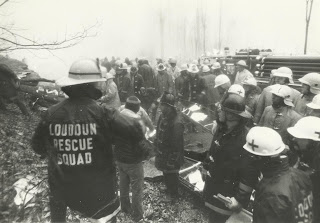 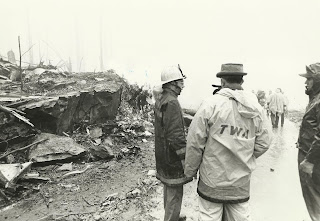 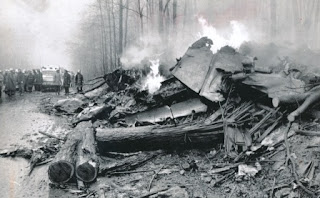 On Dec. 1, 1974, a jetliner bound for Dulles Airport crashed into Mount Weather in Loudoun County, killing all 92 aboard - and revealing to the public a secret Cold War facility for sheltering government officials in a nuclear war.


Federal officials were tight-lipped but the underground installation remained intact.

UPPERVILLE, Va. (AP) - A Trans World Airlines 727 slammed into a wooded slope near a super-secret government installation Sunday, killing all 92 persons aboard.
Capt. WILLIAM CARVLLO of the state police declared "there are no survivors" after rescue workers had combed for hours through the wreckage on Mount Weather, a foothill of the Blue Ridge Mountains.
The plane, Flight 514, was bound for Washington from Columbus, Ohio and was approaching Dulles International Airport in a driving rainstorm when the tower lost radar contact at 11:10 a. m. EST.
The crash site is about five miles north of Upperville, a tiny community in the tip of the state, and about 20 miles northwest of Dulles.
A TWA spokesman said 85 passengers and a crew of seven were aboard the flight, which originated in Indianapolis. He said 46 persons got on at the intermediate stop in Columbus.
The plane impacted about 1½ miles from an underground complex which reportedly is designed to serve as a headquarters for high government officials in the event of nuclear war. A federal spokesman would acknowledge only that the facility is operated by the little-known Office of Preparedness, whose responsibilities, he said, include "continuity of government in a time of national disaster."
Posted by ARLINGTON FIRE JOURNAL at Tuesday, January 30, 2018