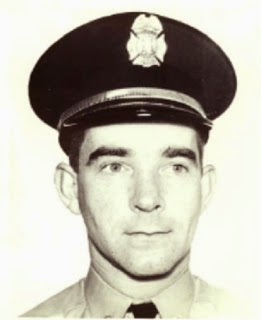 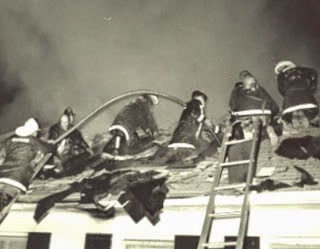 An Arlington County fire captain was killed in the line of duty in a seemingly routine house fire on the night of Monday, Oct. 19, 1964.Capt. Archie Hughes, 33, was the officer in charge of Engine Co. 4 . He got his start as a volunteer firefighter, joined the paid department, advanced to the rank of fire lieutenant in 1957 and fire captain in 1961. His father and brother also served as volunteer firefighters.Hughes died alone in the attic of a two-story brick house at 2362 N. Nelson St. Four other firefighters were injured in the effort to rescue their fallen comrade.Fire marshal's accountFire Marshal Leslie Shelton provided this account of the fire, as reported in the Oct. 20, 1964 edition of The Washington Star:Mrs. Thomas Sanderson was in a first-floor family room with her son, Richard, 12, her daughter Jill, 8, and her mother, Mrs. Hilma Chardavoyne, a wheelchair invalid, when everyone smelled smoke about 7:45 p.m.At first they thought a cigarette had been dropped in a chair. They searched chairs, the carpet, closets and examined the television. Finding nothing, Richard went outside and Mrs. Sanderson went to awaken her husband, who was sleeping in a first-floor bedroom. Richard saw smoke billowing from the roof and shouted a warning to the family.Hughes was one of the first firefighters to enter the burning house. He climbed through a trap door into the attic, wearing protective breathing apparatus and his turnout gear. It simply wasn't enough to protect him from the flames and smoke. (Later accounts suggested Hughes may have removed some of his protective gear to fit into the attic.)According to The Washington Star: When he failed to reappear after several minutes, his men attempted to go after him, but intense heat made the trap door unapproachable.Rescue attempt thwartedOther firemen chopped and tore at the shingled roof in an effort to reach Hughes. They succeeded in making an opening, but a burst of air through the hole caused the blaze to explode throughout the attic, making rescue impossible.Hughes body was recovered about a half hour after the fire was quelled. The loss of a firefighter is always hard on the department, but in the case of Archie Hughes the loss was especially great because he was considered one of the department's up-and coming leaders, a dedicated firefighter and a decent human being."If he had lived I'm sure he would have made chief officer," the late James Fought, a retired battalion chief, said in an interview in the late 1990s. Fought was Hughes' first captain when he advanced to the ranks of the paid department and was assigned to Company 5, in what is now Crystal City.Flags were flown at half mast across Arlington, and the Northern Virginia Board of Realtors, of which Mr. Sanderson was a member, established a fund to benefit Hughes' wife, Eldina, and their three children, who were aged 6 years, 21 months and 9 months in 1964, according to the Oct. 21 edition of The Washington Post.
Posted by ARLINGTON FIRE JOURNAL at Tuesday, March 10, 2015