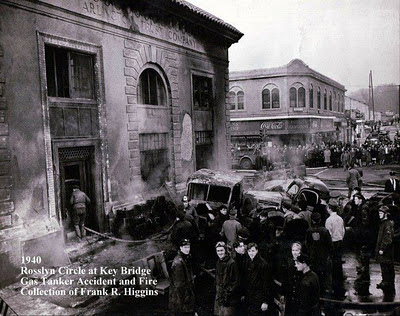 "The early-Sunday quiet of Rosslyn, Va., was spectacularly broken when a 5000-gallon runaway truck-trailer loaded with high test gasoline crashed into a parked milk truck and exploded," The Washington Post reported the next day.

"Blazing gasoline roared through a storm sewer into the Potomac, setting the surface of the river ablaze," the Post said. "The district fire boat was rushed to the scene to prevent the flames from reaching oil barges tied up near Key Bridge."

The Arlington Trust Co. building was gutted, storefronts within 200 feet were scorched and a black cloud hung over Rosslyn and Georgetown.

And yet no one was hurt in the inferno.

"Right after the crash the flames started blazing up all over the trailer," said McCanless, quoted by The Washington Post. "They shot up twice the height of the bank."

His face and clothes blackened, McCanless jumped free and ran across Rosslyn Circle to safety.

Andrew Kovat, 37, of Hyattsville, driver of the Thompson Dairy truck, was across the street at the Rosslyn Lunchenoette, eating breakfast.

The newspaper called Kovat's breakfast "a meal which probably saved his life."