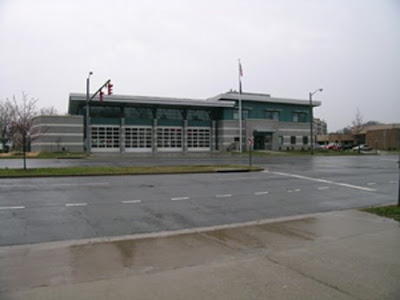 In 2008, the Arlington County Fire Department opened a new Station No. 5 in Crystal City - the latest in a series of firehouses to protect the community.

The original Company No. 5 was organized on Dec. 17, 1926, when the County Board of Alexandria County - as Arlington was then known - approved the charter of the Jefferson District Volunteer Fire Department.

The original company listed seven firefighters on its rolls and operated from a member’s garage at 206 Frazier Avenue - now 23rd Street South - in Aurora Hills.

In 1928, the volunteers opened a station at 101 Frazier Ave. (With the adoption of a new street naming scheme, the station was addressed 501 South 23rd St.)

During the early years, the members operated a hose wagon, a rescue squad and an ambulance.

In 1940, paid firefighters augmented the volunteers with the creation of the Arlington County Fire Department, and as time went on, the ACFD took over staffing of the engine company and ambulance.

In 1978, the original station was closed and firefighters moved to a station at 1750 South Hayes St., which is also the site of the new firehouse.

A monument stone from the original 1928 station - which was refurbished by Station 5 personnel - was placed at the new station, home of Engine 105, Truck 105 and Medic 105.