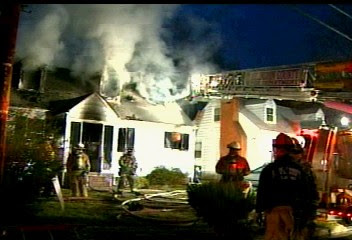 On March 7, 2008, a house fire killed an elderly woman in Arlington County and injured a firefighter. According to Channel 4, firefighters ``found the victim in her bed.''


The Washington Post reported the injured firefighter ``fell through the second floor of the structure while battling the blaze.''

Battalion Chief Carol Saulnier, quoted by the Post, said firefighters were called to the 5500-block of South 4th Street at 5:30 a.m.

They found two people sitting outside the house with minor injuries who told them a third person was still inside.

The elderly woman's body was recovered on the first floor of the dwelling.