IN THE LINE OF DUTY 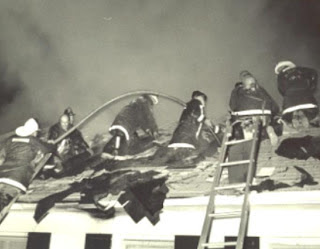 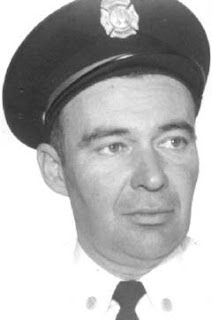 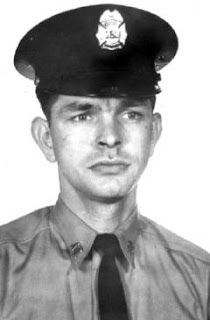 More than 40 years ago, an Arlington County fire captain was killed in the line of duty in a seemingly routine house fire.

Hughes died alone in the attic of a two-story brick house at 2362 N. Nelson St. Four other firefighters were injured in the effort to rescue their fallen comrade.

Fire Marshal Leslie Shelton provided this account of the fire, as reported in the Oct. 20, 1964 edition of The Washington Star:

Mrs. Thomas Sanderson was in a first-floor family room with her son, Richard, 12, her daughter Jill, 8, and her mother, Mrs. Hilma Chardavoyne, a wheelchair invalid, when everyone smelled smoke about 7:45 p.m.

At first they thought a cigarette had been dropped in a chair. They searched chairs, the carpet, closets and examined the television. Finding nothing, Richard went outside and Mrs. Sanderson went to awaken her husband, who was sleeping in a first-floor bedroom. Richard saw smoke billowing from the roof and shouted a warning to the family.

Hughes was one of the first firefighters to enter the burning house. He climbed through a trap door into the attic, wearing protective breathing apparatus and his turnout gear. It simply wasn't enough to protect him from the flames and smoke. (Later accounts suggested Hughes may have removed some of his protective gear to fit into the attic.)

According to The Washington Star: When he failed to reappear after several minutes, his men attempted to go after him, but intense heat made the trap door unapproachable.

Other firemen chopped and tore at the shingled roof in an effort to reach Hughes. They succeeded in making an opening, but a burst of air through the hole caused the blaze to explode throughout the attic, making rescue impossible.

Hughes body was recovered about a half hour after the fire was quelled. The loss of a firefighter is always hard on the department, but in the case of Archie Hughes the loss was especially great because he was considered one of the department's up-and coming leaders, a dedicated firefighter and a decent human being.

"If he had lived I'm sure he would have made chief officer," retired Battalion Chief James Fought said. Fought was Hughes' first captain when he advanced to the ranks of the paid department and was assigned to Company 5, in what is now Crystal City.

Flags were flown at half mast across Arlington, and the Northern Virginia Board of Realtors, of which Mr. Sanderson was a member, established a fund to benefit Hughes' wife, Eldina, and their three children, who were aged 6 years, 21 months and 9 months in 1964, according to the Oct. 21 edition of The Washington Post.

Other line of duty deaths

Captain Charles Theodore, of Engine 10, suffered smoke inhalation after leading his crew to an apartment fire on the fifth floor of the Tyler Building of the Arlington Towers project (now called River Place) on June 24, 1961. Theodore was pronounced dead at Arlington Hospital. Theodore, 39, joined the fire department in 1944 and was promoted to captain in 1953. He was married and the father of three children.
In 1967, Lt. Elmer Marcey died of heart attack at Station 7.
Firefighter William Miller, of Engine 70, suffered a fatal heart attack in 1982 after undergoing a physical stress test.

Responding to an alarm on June 13, 1943, Engine 2 crashed into telephone utility pole, critically injuring Volunteer Firefighter George Skidmore, 46. Skidmore succumbed to his injuries two days later at Emergency Hospital in Washington. Two other firefighters – paid driver Theodore Smith and volunteer Ed Riker – were injured in the wreck, which occurred during a thunderstorm. The 1931 American La France ``hit an oil slick on Wilson Boulevard between Wayne and Veitch Streets,’’ according to Higgins. Skidmore was vice president of the Ballston Volunteer Fire Department and had been an active member for 14 years.

According to the Arlington County Police Department, Motorcycle Officer Arthur Chorovich was killed on Dec. 5, 1964 while responding to a ``Code 3 fire'' in Virginia Square. Officer Chorovich's motorcycle was struck by another vehicle at the intersection of North Stafford Street and Washington Boulevard.

The earliest known line of duty deaths in the Northern Virginia fire service occurred in the mid-1800s in the City of Alexandria.

In 1852, volunteer Charles Glasscock of the Friendship Fire Company was struck by an engine. Then in 1855, seven Alexandria volunteer firefighters (six from the Star company and one member of the Relief company) died in a building collapse in the 100-block of King Street, according to the Alexandria Fire Department's web site.

Cancer has also claimed the lives of many firefighters. A tree was planted at Station 9 in memory of retired Battalion Chief Clark Berry, who died of cancer in 1999.

Fire fighting and rescue will always be a dangerous business. A number of Arlington firefighters have suffered serious injuries. In 1929, Fireman Avenner Beales, a member of the Jefferson District Volunteer Fire Department, suffered severe burns about his face and arms in a fire at the Betholine Oil Company warehouse on Columbia Pike. ``A drum of oil exploded as he an another fireman were playing the hose on the flames,’’ according to a story in the old Washington Times newspaper that later became the Times-Herald.

Lt. John Walker, of Truck 79, suffered severe respiratory injuries in an apartment fire at 2111 Jefferson Davis Highway in February 1979 that ultimately led to his retirement on disability. On June 19, 1985, Firefighter William ``Dude’’ Harris had a close call when his air tank ran out at a fire at 1931 Jefferson Davis Highway. Firefighter Bobby Clark guided Harris to safety and Clark’s ``actions probably saved Dude’s life,’’ according to the fire department newsletter Fire Lines.

On Jan. 26, 1987, Firefighter Stan Browski was severely burned in a house fire at 728 South 25th Street. He spent weeks in the burn unit at Washington Hospital Center. ``In talking to Stan at the hospital the night of the incident, I came away with a very deep respect for one of our brother firefighters who paid a high price for performing his duty,’’ Captain Joseph Arbogast wrote in the fire department newsletter Fire Lines.

Less dramatic injuries - bad backs, broken bones, firehouse slips and slides, and simply wear and tear - have ended firefighters' careers, as have the emotional scars of dealing with death and destruction.

Then again, as London auxiliary firefighter and journalist James Gordon observed in a short story about the hardships of manning hose lines during the air raids of World War II, ``I'm still alive ... I'm still alive.''

In the May 2000 edition of the magazine Fire Engineering, Arlington County’s Daniel Bingham, a second-generation firefighter, addressed the safety issue after the deaths of six Worcester, Massachusetts firefighters in a warehouse fire in December 1999.

``Recently we were discussing the Worcester tragedy, and it dawned on me that the way we do business has changed little since my father came on the job 40 years ago. We still stretch lines into buildings, crawl down hallways, search for victims and extinguish the fire. During all this we hope to get out safely. If we are lost, we rely on the traditional follow the wall to the left, hose lines, rescue lines and so on – just like my father did 40 years ago. Leaders, fire chiefs, and union officials across the nation need to keep pushing for change. Union leaders should put more emphasis on funded safety officers, thermal imaging cameras, quality training, radios for all personnel and electronic accountability systems. These things have saved lives and make our jobs safer. It is sad and unfortunate that progress in the fire service is measured in tombstones.’’

In recognition of all those who have served the fire department, a memorial is located at Station 1 at 500 South Glebe Road.
Posted by ARLINGTON FIRE JOURNAL at Friday, March 18, 2005