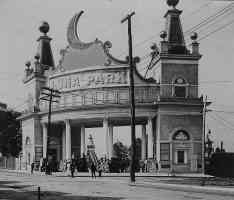 On April 19, 1915, fire destroyed the roller coaster at Luna Park, a forgotten amusement park which was located in the vicinity of Glebe Road and Jefferson Davis Highway.

``The origin of the fire is thought to have been from sparks from a blaze in the woods adjoining the park,'' The Washington Post reported. `` The flames spread through the woods, destroying a considerable section. No estimate was placed on the loss.

``The fact that the structure destroyed was isolated from others of the park and the wind blowing away from them in all probability prevented the destruction of every building on the grounds,'' the Post reported.

According to a history of Arlington County, posted on the county's web site:

``This amusement park, located in the area where Glebe Road meets Route 1, was built in 1906 for more than $350,000. It claimed facilities for 3,000 picnickers as well as a large ballroom, restaurant and circus arena.

``Exhibits were housed in large buildings of various styles -- Gothic, Moorish, and Japanese. A 'shoot-the-chutes' with a 350-foot incline was a leading attraction. The park was eventually damaged by fire and dismantled in 1915.''

At that time, the closest fire stations were located in the City of Alexandria and the District of Columbia.
Posted by ARLINGTON FIRE JOURNAL at Wednesday, June 24, 2009