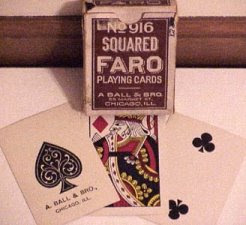 Jackson City - a notorious strip once located along the Potomac River, near the current Boundary Channel Drive and Jefferson Davis Highway - was a fire trap.

Nicknamed the ``The Monte Carlo of America,'' the settlement featured all the ingredients for a memorable night on the town - saloons, gambling houses, bordellos, vice dens and a race track.

On July 14, 1902, flames swept a row of card parlors, as The Washington Post reported:

``Fire that originated in a policy shop last night wiped out every gambling house in Jackson City, at the Virginia end of the Long Bridge. (It) was not much of a fire when it started - a bucketful of water would have quenched it - but the habitues were so absorbed at the roulette wheel and faro table that they refused to put cut the blaze.''

District of Columbia firefighters doused the flames, the shops were repaired - and the games returned.

``Monte Carlo, the notorious resort at Jackson City, is in ashes. About 11:30 o'clock last night fire broke out in one of the row of frame buildings occupied by the free and easy, and before the flames could be checked almost the entire row was destroyed. The fire started in James Wells' one-story building on the west side of the road.''

The final fire broke out in 1904 when a band of vigilantes - ``The Good Citizens League'' - cleared out the undesirable elements and set much of Jackson City alight, according to the Arlington County Historical Society.