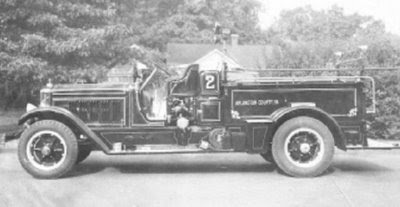 According to a history of the Ballston Volunteer Fire Department:

``The first registered agent of the BVFD was Mr. John Ball, a direct descendent of the John Ball who established a farm on land deeded to him by his cousin, George Washington. The farm was located near a crossroads which became known as Balls Crossroads.

``The BVFD first operated out of a garage belonging to one of the members, where the members would assemble when the bell was sounded, to pull the hand-pumped engine to a fire. The bell was located atop a pole alongside the trolley tracks at the intersection of Ballston Avenue and Fairfax Drive.

``In 1921 the permanent station was built on Ballston Avenue. When the County renamed streets and numbered houses the station address became 911 North Stuart Street.

``In 1976, the entire block where Fire Station 2 was located became the site for the new Glebe Road" Metro Rail station. At that time, only the BVFD and the Ballston Baptist Church still used the Ballston community name.

``The BVFD's negotiation with Metro and Arlington County provided for the construction of the new Fire Station 2 at 4805 Wilson Boulevard.

``In addition, the BVFD required the changing of the name of the Metro stop from Glebe Road Station to Ballston.''