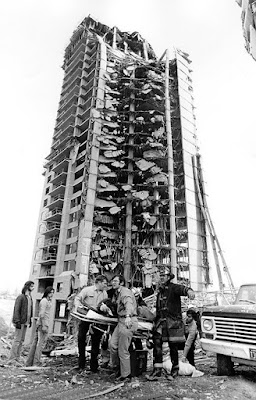 Editor's Note: The following is a first person account of the Skyline disaster in Bailey's Crossroads on March 2, 1973. For a detailed version of the incident, click here.

I worked for Arlington County Fire from March 10, 1972 to March 10, 1973, when I was hired by Prince George's County in Maryland as a police officer.

Steve Heitzler and myself (front center in the photo, with glasses and watch band) were first on the scene at Skyline.
I was detailed to Rescue 5 and we were at Station 4 fueling up when the call came out.
The Bailey's Crossroads fire station was on another call.
When dispatched we were told four floors collapsed and upon arrival we told dispatch that all the floors had collapsed.
We went down in the basement of what was left of the building and found several bodies.

The one we carried out was the first one out that I know of.

We just kept bringing them out and putting the men that were still living into any ambulance or rescue unit we could find and then went back in.
Of course it was not long before there were fire units and rescue units all over the place.

I recall it was a few hours later that we actually took a guy that was injured but not life treating to Arlington Hospital.
After we came 10-8 they told us we could return to our station.

It was surely a sight I won’t forget. 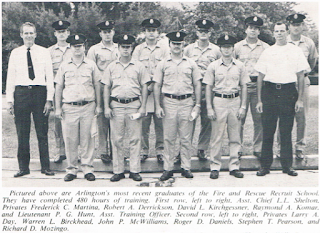