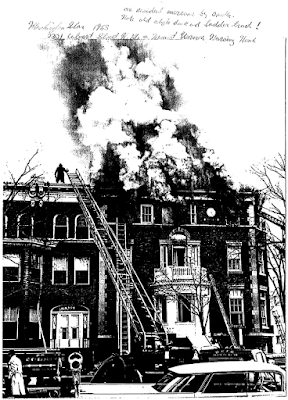 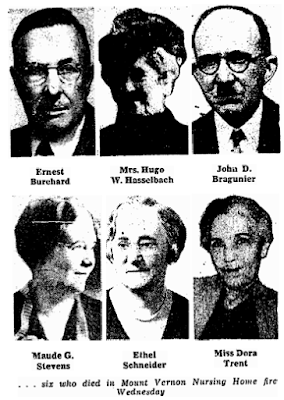 Residents of the first three floors were rescued by employees, firefighters and passersby.


At least 27 other persons -- patients, employes, firemen, policemen and passersby -- were treated in hospitals.

Fire Chief Millard H. Sutton called it "one of the worst fires in years" here.

The seven who died -- four women and three men -- were in bed on the top floor when the fire reached them from the basement. Their bodies were found either still in bed or on the floor.

Two nurses, NANCY COGINS and LUCY CARTNER, said they were on the fourth floor when the ararm was sounded. They said they managed to drag one of the floor's eight patients to safety, hoping firemen could rescue the other seven.
Patients on the first three floors were taken out by employes, firemen and passing citizens. The aged survivors, shock and bewilderment evident in their faces, were led to nearby buildings. There they waited their turns for ambulances shuttling back and forth to hospitals.

All available doctors and ambulances in the city were ordered to the scene and many ambulances from nearby Maryland were pressed into service.

At least one woman patient was taken down a ladder about an hour after the flames broke out, despite the speed with which the fire spread.

The brick building -- the Mount Vernon Nursing Home -- is located in the fashionable Rock Creek Park area near the Calvert street and Connecticut avenue bridges across the park.
The streets nearby are normally heavy with traffic. The added rush of fire and rescue equipment plus a rush of onlookers created such a jam that at one time it nearly halted the movement of ambulances.


There were 24 patients in the home along with five nurses and two assistants.

The cause of the fire was not immediately determined.

It was discovered by a nurse, MRS. RUTH PEACE, when she opened a basement door.

She ran upstairs and began helping patients to escape.

The first alarm was turned in by two police officers who were passing in a police cruiser and spotted the flames.

Workers at the home, passersby and firemen who suffered injuries did so mostly in trying to rescue the elderly patients. Some of them made several trips.

RICHARD CARTER, 23, who works across the street, ran into the burning building, passing several persons who were carrying out patients. He was told the first and second floors had been cleared.

So he struck out for the third floor. There, in a thick haze of smoke, he found a woman on the floor. He carried her in his arms, down the stairs and out of the building. CARTER said he was coughing so violently from inhaling smoke he could not make another trip.

The Associated Press reported a house fire in the District of Columbia killed seven people, including five children, on April 12, 1935.

"Firemen carried the seven dead from the house and took them to a hospital, where efforts to revive them failed," AP said. "Although the bodies were burned, asphyxiation was given as the cause of death.

"The fire was said to have started from a faulty flue in the kitchen on the first floor."
Posted by ARLINGTON FIRE JOURNAL at Wednesday, July 29, 2015