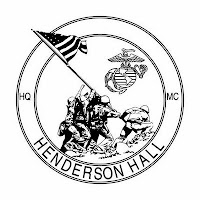 On July 22, 1956, an Arlington County firefighter hurt at a blaze at the Henderson Hall Marine Barricks saved a Marine injured at the fire - in the ambulance taking them to Arlington Hospital!

Leslie Hughes "struggled up" from his cot to administer artificial respiration to Marine Sergeant Hackett, The Washington Post said.

Another firefighter, Guy Swarthouth, administered oxygen to Hackett, who was "out for about five minutes," said Hughes, who returned to the fireground.