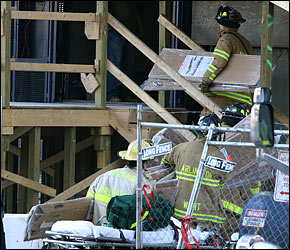 (Photos from ACFD and The Washington Post)
A concrete slab collapsed Dec. 8 on the 24th floor of a high-rise building under construction in the Rosslyn district of Arlington County, trapping three workers and injuring a dozen more.

Arlington County firefighters - along with fire crews from the Fort Myer military post, the City of Alexandria and Fairfax County - treated the casualties. A surgical team from George Washington University Hospital also responded. The size of the alarm assignment was the equivalent of a general alarm fire.

The incident - at 1901 North Lynn St. - recalled high-rise construction accidents at job sites in Crystal City in 1968 and Bailey's Crossroads in 1974.

Construction worker Oscar Moscoso, who was on the roof of the high-rise, told reporters that a scaffold failed - triggering the collapse of wet concrete at about 8:30 a.m. Workers - who had planned a "topping-out" party later in the day - used their hands and shovels to reach the injured before firefighters and paramedics arrived.

Arlington County Fire Captain Tom Polera said an approximately 60 x 30 foot area of the roof collapsed onto the 24th, or top floor, of the building about 2 1/2 hours after workers began pouring concrete, according to The Washington Post.

During the rescue, a firefighter suffered a back injury.

Units assigned to the alarm, according to ACFD3.COM: