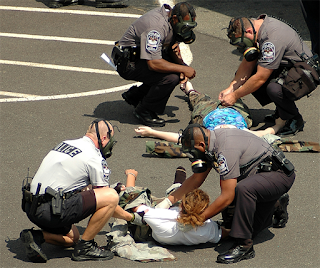 The Arlington County Fire Department participated in a bio-terrorism exercise at the Pentagon on May 17, 2006.

The Defense Department issued the following account of the drill, written by Army Sergeant Sara Wood of the American Forces Press Service:

The Pentagon Force Protection Agency, Arlington County Fire Department, Red Cross, and other local and federal agencies participated in the exercise, dubbed "Gallant Fox 06," based on a scenario involving a suspected anthrax attack inside the Pentagon that triggered a sensor. In the scenario, testing was done and the presence of anthrax was confirmed.

Sixty-two Red Cross volunteers played the roles of affected Pentagon employees. They were evacuated out of the Pentagon to a decontamination site in the building's north parking lot. There they removed their "contaminated" clothing, took showers to rid themselves of any anthrax spores, and were given antibiotics to prevent infection. Some players also simulated special situations, like symptoms of anthrax infection or people with disabilities who needed assistance.

The exercise was a success, but the agencies did identify some areas where improvement is needed, said Arlington County Fire Chief Jim Schwartz. The decontamination of potentially contaminated people poses a challenge, he said, because right now the procedures are for people to remove their clothes outside, shower in a trailer, and come back outside.

"You can imagine what kind of circumstances we would be facing if this were a day in mid-winter, trying to do the kinds of things that we were doing," he said.
Posted by ARLINGTON FIRE JOURNAL at Wednesday, May 17, 2006