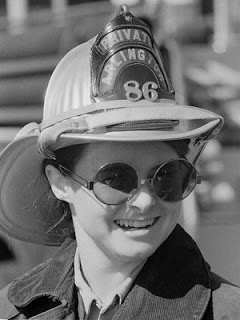 The Arlington County Fire Department made U.S. history when it hired Judith ``Judy’’ Brewer as the nation's first female career firefighter in 1974. It was front-page news.

Brewer’s hiring set off a social and political firestorm. ``The wives were upset about their husbands bunking with a woman,’’ Brewer recalled in an article in the Dec. 25, 1990 edition of The Washington Post. ``I’m still here, so obviously the concern died down eventually.’’

Brewer, whose last name then was Livers, was attracted to the fire service while helping her firefighter husband study for his fire science classes, according to the group Women in the Fire Service Inc.

A number of women had served as volunteer firefighters in the U.S. before then, starting with an African-American woman named Molly Williams in New York City in 1818. What’s more, female firefighters valiantly helped to protect London during the German air raids of World War II - ``The Blitz.''

Nonetheless, many of the Arlington firemen signed a petition urging Fire Chief Robert Groshon against hiring any more women as firefighters.

Their wives demanded, and got, a meeting with the chief and County Manager Bert Johnson. Brewer was quoted as saying, ``Everybody watched me, everybody asked everybody else, `What did Judy do on that fire? I knew this would keep happening until I gained their acceptance.’’ Brewer was also quoted as saying, ``The wives are extremely upset. One of them screamed at me and told me not to talk to her husband.’’

Brewer was first assigned to Station No. 4 in Clarendon. Accommodations for women were lacking at the firehouse. She slept in the same bunkroom as the men. There were no partitions, so she slept with her clothes on, Groshon said. She was allowed, however, to shower in private in the duty battalion chief’s bathroom.

According to a profile of Brewer in the Jan. 18, 2001 edition of the Arlington Sun Gazette, which was written by Ingrid Kauffman of the Arlington Public Library, ``When she applied for the job she was not interested in breaking new ground as a woman. Nor did she realize she would be the first. She just wanted to be a firefighter. … From the beginning she had to overcome a lot of opposition, from both her male co-workers who didn’t think she would be able to do the job, and from their wives, who were concerned with the sleeping arrangements.’’

Recalling those events of more than a quarter century ago, Groshon said, ``I knew I was sticking my neck out’’ in being the first to hire a female firefighter, but ``there were no rules that said a woman couldn’t be hired.’’

Groshon was also impressed by Brewer’s determination. ``She came in looking for the job. I told if she passed the test we’d hire her. She flunked the sand bag test (in which fire service candidates hauled sandbags to test their strength) the first time. So she built her own sandbags and practiced at home.’’ She passed on her next try, he said.

Brewer, who advanced through the ranks of the fire department during her 25-year career, retired in 1999 as a battalion chief. She helped open the door for other female firefighters in Arlington County – and beyond.

As for Groshon, who retired in 1978, it can be said he was at the forefront of the ``progressive firefighting'' movement in the U.S.

In addition to opening the door to female firefighters, Groshon caused a stir by advocating the use of safety yellow for fire apparatus instead of the traditional red. Paramedics also debuted during Groshon's tenure.

Additionally, Groshon was instrumental in the creation of a regional response plan, in which the nearest Arlington, Alexandria of Fairfax units are dispatched on alarms, regardless of jurisdictional boundaries.
Posted by ARLINGTON FIRE JOURNAL at Friday, March 18, 2005