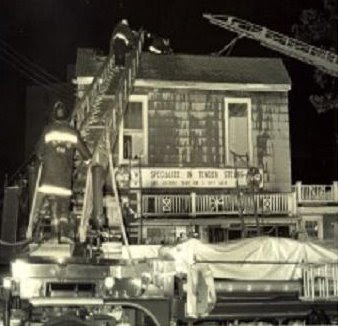 On July 28, 1962, three Arlington County firefighters were injured in a two-alarm fire at the Spot Tavern.

The midnight fire - the third in less than a month at the tavern - broke out in a basement men’s room of the two-story frame structure, which also housed an apartment and six rented rooms.

Ray Evans, then deputy chief of the Clarendon Volunteer Fire Department, was among those injured and was admitted to Arlington Hospital, according to The Washington Post. A roomer was also injured in the fire.

The Spot Tavern was located at 1200 North Fort Myer Drive.
Posted by ARLINGTON FIRE JOURNAL at Wednesday, May 28, 2008